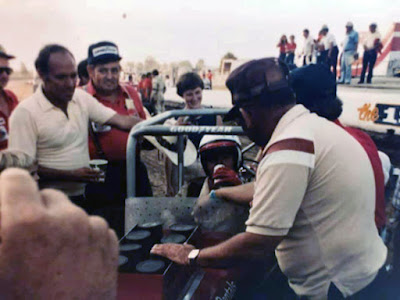 George Snider cools off in victory lane after winning the Tony Bettenhausen Memorial at the Springfield Mile. - Terry Young Collection

Larry Rice, of Brownsburg, Ind., finished second with veteran Jim McElreath of Arlington, Texas, third as only the leading three of the race’s 26 cars completed 100 laps, each a mile long. Engine problems caused many of the cars to drop out. Joe Saldana, of Lincoln, Neb., was fourth, having run 99 laps.

It was the first championship dirt car win in 10 years for Snider, of Bakersfield, Calif. He initially had taken the lead from pole winner Tom Bigelow of Whitewater, Wis., on the 66th lap and held it until the 73rd. Roger Rager, of Mound, Minn., then grabbed the lead but was overtaken by Snider on the backstretch of the 85th lap. Snider pulled away from the field to earn $8,250.

Rager, who ran out of gas on the 93rd lap, finished eighth. Bigelow, the leader for the first 65 laps, Rich Vogler and Gary Gray, both of Indianapolis, and McElreath all tangled coming out of the first turn of the 69th. Bigelow and Gray flipped their cars but were unhurt.

The accident brought out the red flag, however, and temporarily stopped the race, which also was hampered by four yellow flag situations. Morning rain caused a 3-hour, 10-minute delay in starting the race.