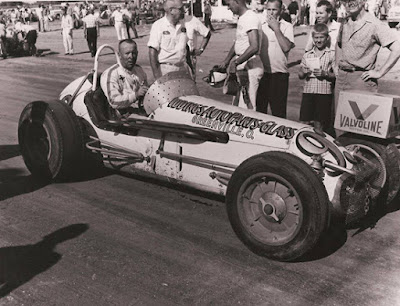 Branson all led the 31 qualifiers with a 20.90 second lap on the half-mile.

Don Davis was critically injured after having received the checkered flag ending the feature. Davis, who missed the day’s events in his own J.B. Rose Trucking Chevy, jumped into the Brown Special, which owner Don Brown had run in the second and third heats. Davis put the car into the feature thought the 10-lap consolation in which he started last but finished fifth.

Davis was running 12th behind Bobby Boughan when they came out of the last corner. Boughan’s machine peeled a tread and Bobby moved down while raising his hand. Davis evidently saw this and moved a little high and tried to beat Boughan to the checkered. Davis’ car got into the loose dirt near the top of the track and slid to the guardrail and flipped into the air. The car lit upside down bending the roll bar down and then flipped back onto it’s wheels.

Davis was removed unconscious and taken to St. Mary’s Hospital with a skull fracture, broke nose and broken cheekbone.

Roger McCluskey, driving the Konstant Hot Chevy, chased the high-flying Branson to the finish and hot on his heels was A.J. Foyt in A.J. Watson’s Chevy.

Finishing behind those three were Bobby Marvin, then a few car lengths behind was Ronnie Duman, Elmer George, Parnelli Jones, Chuck Hulse, and Chuck Engle.

Jim Hurtubise, who had to borrow a car from Steve Stapp, and run the consolation to make the feature after having missed the program in his Sterling Plumber Special, finished 10th.

The track kept getting slicker as the day wore on and some of the name drivers found themselves watching the feature from the sidelines.