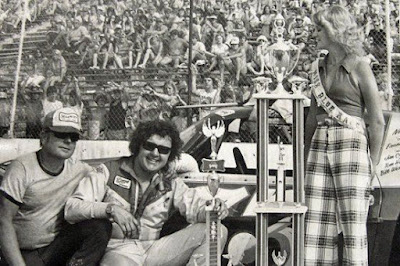 Dave Watson shows off his trophies after winning "Blue" race and the state title at Kaukauna.

Watson also collected his second state championship with 1,610 points. He won the title in 1973. Schuler finished second in the series with 1,270 points followed by Dick Trickle of Wisconsin Rapids with 1,120 points.

Rich Somers of Steven Point led the first 10 laps of the 65-lap feature with his “Thunder Pony” 1972 Mustang. Caledonia’s John Reimer then took over the lead on the 11th lap after battling side-by-side with Somers for five laps.

Reimer held onto the top spot until the 14th round when he was passed by Trickle, driving a 1970 Mustang. Trickle, a former state titlist, paced the 24-car field until the 17th lap when Schuler, a 23-year-old flash from Lockport, Ill., sped past in his 1976 Camaro.

Schuler stayed out front until the 24th lap when Watson, of Milton, flew past him on the front chute. Schuler then dogged Watson for the rest of the event. At several times Schuler pulled even with Watson in the turns but could not overtake the winner. Watson won by four car lengths at the finish.

Finishing behind Watson and Schuler in third place was Rudolph’s Tom Refiner in his 1974 AMC Javelin. Reffner was the top qualifier in the 51-car field with a 20.82 clocking around the half-mile paved oval. Rounding out the top six were Trickle, Reimer and Mike Miller of Wisconsin Rapids.

Earlier in the afternoon Miller won the first 20-lap qualifying neat race. The event was a real tussle as Kaukauna’s Pete Parker dueled with John Schultz of Shawano for the opening seven laps. Schultz spun out of the second position on the sixth lap and the pack tightened up on Parker on the restart.

John Speer of Beloit took the lead for several laps before giving way to Bloomington, Minn., pilot Bill Oas. Miller then made his move and passed Oas for the lead on the 14th lap. Oas was second and Roger Regeth of Kimberly third. Reimer won the second heat event by a half of a car length over Somers with Doug Strasburg of Johnson Creek third.

Dave Bruggink of Sheboygan, racing for the first time at the Kaukauna track, won the 30-lap semi-feature. The 22-year-old former sportsman driver wheeled his 1976 Camaro to an impressive win over Steve Lurvey of Dousman and Gene Coleman of Menominee, Mich.

Bruggink led the first 24 laps of the race before Coleman surged out in front. Coleman stayed in the lead until the final lap when Bruggink overtook him.

The race was marred by a spectacular crash on the eighth lap when Dan Johnson of Oneida and Mike Langsdorf of Rio collided on the backstretch. Both cars crashed through the inside guardrail at full throttle. Neither driver was injured, but both were eliminated from the race.

The afternoon’s races, witnessed by 5,854 fans, got off to a wild start as the first lap of the dash for cash resulted in a multi-car pileup on the backstretch when cars driven by Schuler and Jim Sauter of Necedah came together Sauter’s car veered into the inside guard rail and Schuler's climbed the outside wall

They were leading the pack when the crash occurred, and the rest of the field scattered in all directions in a cloud of smoke Both rejoined the race and Sauter came back to win the eight-lap affair.