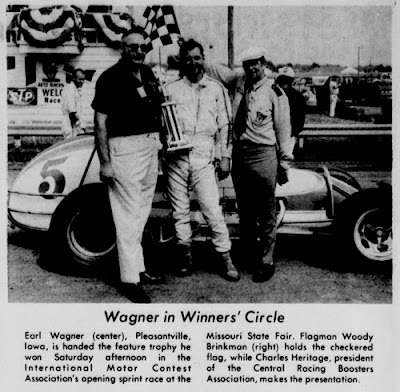 But those heroics were not good enough to notch a feature win as he trailed Earl Wagner of Pleasantville, Iowa, and second-place finisher Jerry Richert of Forest Lake, Minn., across the finish line.

Utz, who drew 44th in the time trial runs, barely made the main event. After his time trials, his clocking of 24.52 seconds placed him out of the consolation feature. However, he was placed in the consolation after two of the cars dropped out.

The top five cars in each of the three heats, as well as the consolation, qualified for the feature. Starting on the outside of the last row, Utz managed to finish third and make the field for the 30-lap finale.

But his start there was no better than it was in the consolation – on the back row. By the fifth lap, however, the Sedalia pilot had moved into seventh position and on lap 11, he sailed past Eddie Leavitt and took over third-place. Ten laps later he passed Richert, who was running second but dropped back into third on the 27th circuit.

Rounding out the top-five positions in the 30-lap feature were Bob Kinser of Bloomington, Ind., and Wib Spalding of Granite City, Ill.

Track conditions during the early stages of the racing program were fast and two State Fair standards were erased. Harold Leep’s one-lap record of 23.11 seconds was shattered by Wagner. Wagner eclipsed that mark with a clocking of 23.03 seconds on the second of two qualification laps.

Thad Dosher of Topeka, Kan., wiped out the old mark for an 8-lap heat race with a time of 3 minutes and 16 seconds. Utz had set the previous mark in 1970 at 3 minutes and 18 seconds.

It was a profitable day for Wagner. He nabbed $750 for winning the feature, pocketed $200 for setting fast time and collected another $40 for placing fourth in the first heat.

Wagner’s win was the second feature victory for him so far this season. He nabbed the IMCA sprint car feature at Cedar Rapids on Memorial Day.

The main event was slowed two times due to yellow flags. The first one came out on the third lap when Dale McCarty flipped going into the first turn and ended up head first on top of the guard rail. McCarty was not injured in the accident but was forced to the pits.

The other wreck occurred on the tenth lap when Dave Ross went over the hub rail in the first turn. He and Steve Schultz tangled going into the curve, when Schultz nicked Wib Spalding’s rear wheel. Ross dropped out but Schultz rejoined the field.