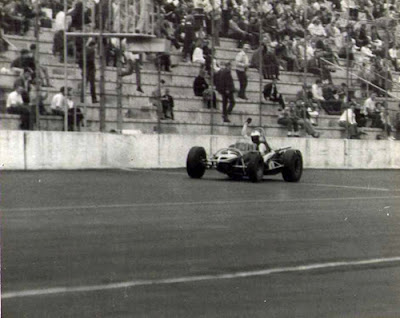 Lives with the shadows of Notre Dame’s Golden Dome, puts the bubbles in a hometown beer, and delights in pushing hiss young children around in a wagon.

That’s the incongruous but highly adaptable story of Tom York, King for the Day of the Minnesota State Fair sprint car races Saturday on a cool track which produced remarkably warm competition for the 8,560 fans.

York’s low-slung roadster pulled away from the 20-car field in the 30-lap IMCA feature on the sleek half-mile asphalt bowl and at the end of the accident-marred main feature, the Hoosier invader owned a comfortable 8-length lead over runner-up Ray Wright.

York admits he’s no dirt lover, but he eats up the asphalt. Earlier in the day he had problems, but he switched to a new Hoosier left rear tire, thinned his fuel mixture, and shifted his chassis weight ratios for the feature. It was only a matter of time until his long, low silhouette owned the field.

But the early stages of the feature had its moments when hometown hero Jerry Richert battled for the lead with another Indiana roadster Ray Wright. But Richert’s car wasn’t handling the way he knew it should. Suddenly, while fighting for third-place, the Forest Lake, Minn., IMCA point leader felt the familiar shakes which told him that the left front shocks had torn loose.

Wright’s roadster finished second and Bob Davis, who claimed he “was not running completely healthy,” was third.

It was in all a remarkable day of racing and a due tribute to the memory of the late Frank Winkley who directed the competition for over two decades. His widow, Verna, was in command and the action was fast, furious and perhaps the closest in Fair annals.