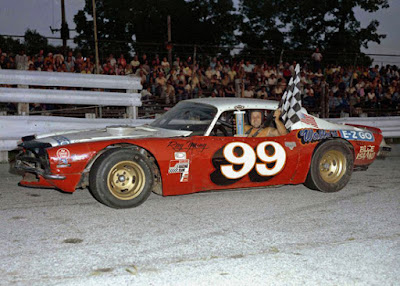 During a career that spanned from 1952 to 1983, Ray Young won 8 championships at 5 Chicago speedways. - Stan Kalwasinski Photo

by Tony Baranek
Talking with one legend about another legend, I was already on Wednesday to tell long-time Raceway Park announcer Wayne Adams Sr. why Ray Young is my all-time favorite Chicagoland driver.

But Adams beat me to the punch line of my own story.

“He was always considerate of children around his car after the races. He’d show them things about the car and let them sit in the car if they wanted to.”

I had to shake my head and smile.

Back when I was 9 years old, I was one of those children that Young let sit in one of his cars. It was the first time I visited Raceway, and Ray made me a fan for life.

A lot of people who considered Young their favorite driver will be at Kurtz Memorial Chapel in New Lenox Aug. 10. Starting at 9 a.m., we’ll celebrate his life and the great memories he gave us driving the wheels off of his No. 99.

During his career at Raceway, Young won 107 late model feature races and track titles in 1962 and 1973. He won three championships at Waukegan Speedway and one each at the Mazon Speed Bowl, Grundy County Speedway and Illiana Speedway.

In 1975, Young won the Chicagoland Driving Championship, a points competition among drivers at Waukegan, Grundy and Illiana. He was also successful on the ARTGO and ASA circuits before retiring in 1983.

Young was a solid choice for enshrinement in the Illinois Stock Car Hall of Fame in 2013.

Beyond the numbers, the “tobacco-chewin’ truck driver” from Dolton was a Hall of Fame individual.

He was always ready to greet a fan. And despite a refuse-to-lose grittiness as a driver, he was more than willing to help a fellow driver in need.

“Ray took care of me back in the day,” Weltmeyer said. “He was one of the guys I looked up to. And he could really manhandle a car.

“I mean, he was a big dude and if the car wasn’t working as good sometimes, he could manhandle it with no power steering. He was a tough racer, but he had the respect of all of the drivers he raced against.”

“When I finally accomplished that goal in 2003 they told me that,” Weltmeyer said. “To be recognized with (Young) felt really good. He was a great racer his whole career, and to be on the same page with him for something, I’m proud of that.”

So just how popular was Ray Young? Danny Colyer, who under the name James Bond raced against him for many years, cracked me up with his answer.

“He was my wife’s favorite driver, believe it or not,” Colyer said, laughing. “She went to the track before her and I got together, and Ray was always her favorite. She presented him with a trophy one year.”

Colyer lettered some of Young’s early cars before becoming a late model competitor himself. Count 007 among those who admired Young’s toughness and appreciated his respect.

“Ray Young was a good, clean driver,” Colyer said. “And he was just an honest, down to earth guy. He was one of the best."