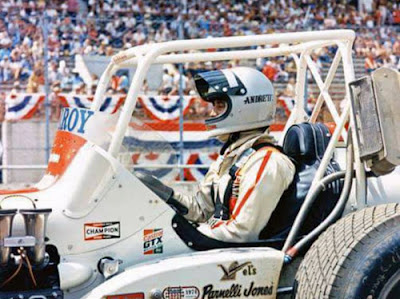 Mario Andretti awaits the start of the race at Sedalia.

Andretti, who moved into the division lead of the dirt cars in the United States Auto Club with the victory, his first of the year, had more problems to worry about than the traction and tread on the right rear tire of his Vel’s Parnelli Jones Ford racer – that is his fuel.

“It sputtered three times late in the race,” he commented, climbing out of the cockpit of the Viceroy machine.

“We noticed the last time we raced here (1970) that this track takes more fuel than most,” he added.

Andretti jumped into the lead on the first lap ahead of teammate Al Unser, who won the opening dirt race in Syracuse, N.Y., on July 4. He never relinquished the top spot.

The race was interrupted four times due to accidents. The first of which stopped the race and was the one that saw four cars eliminated from the race, including defending dirt division champion Unser, who flipped coming out of turn #2.

The accident was actually started of all places, behind him. Bill Engelhart and Ralph Liguori tangled and spun between the first and second turns. That immediately brought out the yellow flag.

Unser ducked behind Andretti who had jumped into the lead from his pole position. George Snider couldn’t slow as quickly as Unser. While Unser was flipping, one of his wheels struck Snider’s roll cage, breaking it and causing Snider to suffer an injured shoulder.

Unser said he didn’t know what caused him to flip.

Greg Weld, one of the crowd favorites from Independence, Mo., also spun and hit the guard rail, causing enough damage to the suspension to force him out of the race.

Unser’s flip changed the yellow flag to red, halting the race. Unser was not injured, and Snider reportedly was injured only slightly.

Andretti grabbed the lead on the restart 20 minutes later, but had to slow for another yellow flag, when Mel Cornett and Engelhart spun between one and two. The yellow was out for seven laps. Both were forced out of the race.

On the 11th lap, Joe Saldana spun between one and two and was hit by Larry Cannon. Saldana ruptured his fuel tank and was out of the race. Cannon was able to continue.

The other yellow came out on the 34th lap when Larry Rice spun and hit the wall between three and four.

The accidents weren’t the only factors that caused the field to dwindle quickly. Mechanical problems cut into the starting field of 24 as well.

Only seven cars were running at the end of the 100-mile feature, which ended about seven minutes before the rain and hail hit.

Andretti, who won two of the three races on the dirt schedule a year ago, finished a half lap ahead of runner-up Tom Bigelow. Andretti and Bigelow were the only drivers on the same lap at the end of the race.

Darl Harrison would end in third while Wally Dallenbach was fourth and Larry Dickson grabbed fifth. The other two cars still running at the finish were John Hubbard and Gary Ponzini.

Thad Dosher of Topeka, Kan., who piloted the Don Duerst Chevrolet out of Columbia, Mo., did an outstanding job in his initial USAC dirt appearance, placing seventh. He logged 96 laps and was only two laps off the pace.

The race, which kicked off a six-race program under the promotion of the Professional Auto Racing Promotions of Missouri, Inc., was witnessed by an estimated 7,500 spectators.