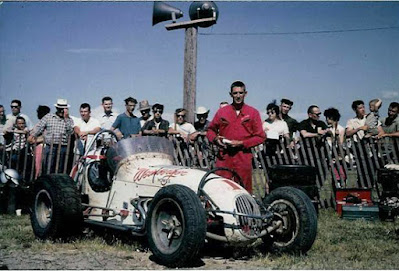 Johnny White grabbed yet another IMCA win, this one at the half-mile Knox County Fairgrounds.

Chauffeuring his #1 Weinberger Chevrolet, White took the front-running spot in last night's feature which was interrupted twice by mishaps. Two restarts were necessary in this event and no times were recorded.

Jerry Blundy, who had fast time of 24.66 seconds in Thursday's qualifying runs, went through the fence on the first turn of the fifth lap, and was unable to finish the feature race.

Bob Coulter of Lakewood, Calif., who was involved in four accidents during the two-night race program, hit Blundy from the rear to cause the Galesburg, Ill., driver to start a spinout. Blundy was leading the field at the time.

Al Sweeney, president of National Speedways, Inc., and starter and referee in last night's event, stated that he was recommending Coulter be suspended for a minimum of 30 days, This recommendation is to be made as a result of Coulter's reckless driving in the two-night race program at the fairgrounds, Sweeney said.

Another accident occurred on the first turn of the feature event when Buzz Gregory spun out at the start of his 14th lap. Gregory suffered minor injuries and was rushed to the hospital via ambulance.

This was the second injury in two nights with Don Brown of San Fernando, Calif., hospitalized as the result of an accident Thursday evening. Brown, who sustained cracked ribs and abrasions on the arm, was released from St. Mary's Hospital this morning.

Steve Orme of Sherman, Ill., won the third heat in 3 minutes and 37 seconds while White won the match race, a 5-lap event in 2 minutes and 8 seconds.

Leep, who won Thursday night's feature and was second in the main event Friday, won the Australian Pursuit in the time of 4 minutes and 27 seconds. This was a 10-lap event.