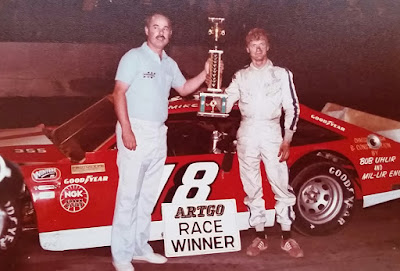 Morris, Ill. (August 6, 1978) - Mike Miller of Wisconsin Rapids, Wis., came from the back twice to win the Fourth Annual Wayne Carter Classic Sunday night at the Grundy County Speedway before its largest crowd of the year.

Sunday’s 11-event program concluded the ARTGO Summer Nationals with Joe Shear of South Beloit, Ill., being named the overall champion of the two-day event on the strength of his third-place finish Saturday night at Capital Super Speedway in Wisconsin and his runner-up position at Grundy Sunday night.

Mark Martin, the winner of Saturday’s event led the points for the $500 bonus going into the feature, but he had to pit on the green for a flat tire and finished ninth.

Controversy again haunted the Carter Classic — a collision between leader Ed Hoffman and Miller in the 91st lap sent Hoffman skidding into the infield with a flat tire. He was scored 10th.

Hoffman took the feature lead from Shear in the 56th lap to become the fourth leader of the century run Dick Trickle led the first 21 laps, but later dropped put with a valve problem in the 66th lap.

Mark Malcuit passed Trickle for the lead using the outside groove, but he relinquished top spot to Shear in the 25th lap and soon headed to the pits when his car cracked a head.

Hoffman, a three-time champion at Grundy, opened a sizeable lead over the field and looked to be a sure winner until Chuck Acres dropped a valve and brought out the yellow in the 87th lap.

Earlier Miller had worked his way from 13th starting berth (fastest qualifier started 10th) to third when he spun in the 57th lap and had to restart in the rear.

The next four laps created the problems as Ray Young returned to the track after a tire change and pulled in front of the leaders on the green and became an obstacle to be lapped.

Reffner lost three spots in the first scrap as the leaders went three-wide. Then on the 91st lap, Hoffman and Young bumped on the back stretch, which started Hoffman slightly sideways, and Miller hit his left rear tire, flattening it.

Hoffman spun into the infield and out of the race with Miller continuing for the win, followed by Shear, Reffner, Musgrave, and Burgess. John Knaus finished sixth, one lap down.

Hoffman claimed a foul by Miller, but officials ruled the incident was accidental and Miller’s first-ever ARTGO feature win stood up.

The early laps of the 21-car event saw Denny Nyari and Trickle dice for the lead in the opening laps. Nyari fell out in the 71st lap with car problems while challenging for fourth Don Biederman of Canada was sent to the pits with a severe oil leak in the third lap during a caution period after Missouri’s Rusty Wallace tagged the fourth turn wall.