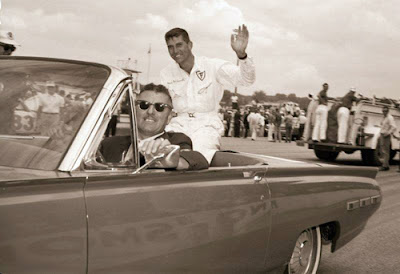 Paul Goldsmith takes a victory lap after winning the 150-miler at Milwaukee.

It was the first victory in two years of trying on the one-mile paved track for Goldsmith, of St. Clair Shores, Mich. Goldsmith, driving a 1962 Pontiac, collected $3,043 in prize money.

Goldsmith grabbed the lead from Ward with 15 miles remaining and kept the crowd of 21,087 on its feet until the very finish as he fought off challenges from both Ward and Norm Nelson of Racine, Wis.

The three cars roared around the track with Nelson only two seconds behind Goldsmith and Ward who were racing nearly bumper to exhaust pipe. Goldsmith gradually pulled away, but on lap 140 Nelson went around Ward and began to close on the leader’s four-car-length lead.

With four laps left, the three cars screamed into the first set of turns but only Goldsmith and Ward would exit as Nelson would with coil failure.

Nelson was credited with 13th place.