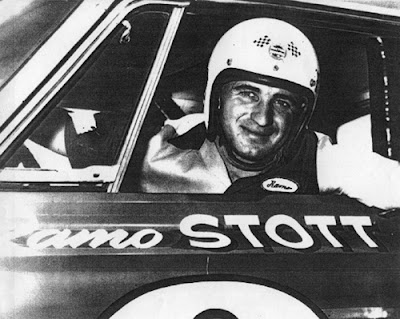 His fellow townsman, Ernie Derr’s chances vanished on the 78th lap when he blew a tire and finished in second position.

Derr and Stott started on the front line by virtue of their fast times in the time trial.

Both smashed the one-mile time record. Stott beat his own record of 40.31 seconds made in 1966 by turning the mile in 39.96 seconds this time fell by the wayside seconds later as Derr spun the mile in 39.90 seconds, which gave Derr $100 for the fastest time and $100 for breaking the record, and Derr drew the pole position.

The race actually turned into a five-way duel between Stott, Derr, Lenny Funk, Otis, Kan., Lewis Taylor, Shawnee, Kan., and Ole Brua, Albert Lea, Minn., all of whom finished in the money.

The race was moving along in excellent condition until the 20th lap when Dale Keeling, Dixon, Mo., spun out on the first turn and created a five-car pile-up, with none of the drivers being injured. This put the race into moving on a caution signal until the track was cleared.

Resuming the speeds of 100-miles-an-hour or better the race continued to the 36th lap when Winfred Keeling, brother of Dale, crashed into the inside rail on the first turn and spun across the track striking the iron guard safety rail on the outside edge of the track.


Keeling was taken to the local hospital complaining of a neck and arm injury. He later walked out of the hospital after examination with nothing more than bruises. His car was in a tight spin as it spun across the track.

Stott and Derr, when dueling for first place on the 62nd lap actually broke the one-mile time when they snapped across the electric eye for the mile in 39.36 seconds. However, this did not count on the mile record for time.

It began to sprinkle about the 75th lap, and by the 86th the track was too slick; an oddity of the rain, the heavy portion fell on the north end of the mile track making it extremely dangerous. As the checkered flag dropped on the 86th lap it began to rain heavily and stopped 10 minutes later.

On the 25th lap Derr had the lead, Stott second. Funk third; at the 50th it was Stott, Derr and Taylor; Taylor moved to the front on the 51st lap for one circle of the track. Stott was back in the lead on the 57th lap; Derr took over on the 70th and was there through the 75th; Stott moved out front on the 78th when Derr had tire trouble.

The finish when the event was stopped on the 86th lap was Stott, Lennie Funk, Derr, Ole Brua, and Taylor rounding out the top five.