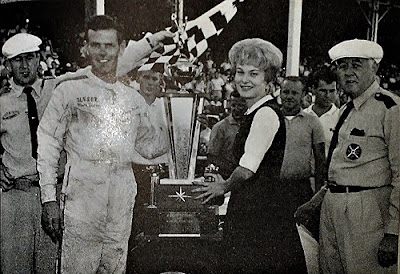 
Sedalia, Mo. (August 25, 1962) – Bobby Unser, making his first invasion of International Motor Contest Association circles since 1956, snagged one of the venerable association’s most coveted laurels as he won the 8th annual Missouri Futurity in near-world record time before some 12,000 thrilled race fans.

Unser, driving the Ron McGowen Chevy, sat on the pole for the 50-mile feature but trailed going into the first turn as front row starter Jerry Blundy of Galesburg, Ill., speared the Wilson Chevy ahead on the start.

With the Albuquerque, N.M. hairpin artist fast on his bumper, Blundy set a torrid pace for the first 13 laps, only to have Unser get by on the outside as Blundy found himself boxed in by lapped traffic on the first turn.

At that point, Unser set sail, turning laps at 39.12 seconds, more than a quarter under his time trial mark, and opening up a lead that ranged at times to half a mile.

Unser averaged 90.22 miles per hour in a race that took 33 minutes and 15 seconds, seven seconds off the mark set by Arnie Knepper last year. He collected $1,150 for the victory.

It was a track for big car racers powered by Chevrolet motors. The car with Chevy motors took all but one event, that going to an Offenhauser-powered car driven by Arnie Knepper of Belleville, Ill., the winner of the second heat.

The first heat, 10 laps, was won by Jack Brunner of Garden City, Calif., the second heat by Knepper and the third heat by Jerry Mans of Wood River, Ill. Gordon Wooley of Waco, Tex., won the 10-lap Handicap and Duke Wyrenbeck of Los Angeles, Calif., took the 10-lap consolation.