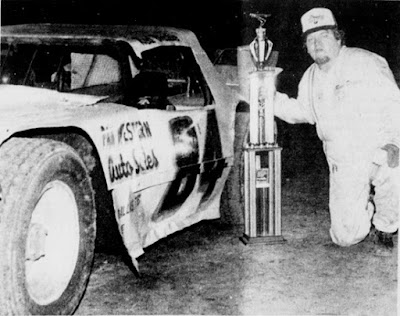 Red Dralle poses next to his trophy after winning the KIJV 100.

The late model driver from Waterloo, Iowa doesn’t even want to remember his debut at State Fair Speedway. “I crashed my first time here,” he recalled.

But, his next two visits are worth remembering. Two years ago, in the KIJV South Dakota 100, Dralle finished third. And, this year... well, it’s one trip to the Fair City that Dralle won’t ever forget.

Dralle put his 1982 Chevrolet Camaro in the lead on the fourth lap and the rest is history as he won the 50-lap feature and the $1,200 first-place payoff in the 1982 version of the fourth annual KIJV 100.

Dralle, who started on the outside in the front row besides pole setter Dwaine Hanson of Lakefield, Minn., complained of being geared wrong in a 25-lap qualifying race Tuesday night. But, in the finale Wednesday night, Dralle and his Camaro clicked like clockwork.

The restart he referred to was a red and yellow flag on the 30th lap that allowed the cars to refuel and make any needed adjustments. When the green flag came back out, Dralle resumed his leadership role.

Dralle’s companion at the front of the pack was Hanson, who was among the first to offer a hearty handshake after the trophy presentation. Hanson used his pole position to grab the early lead, but that lead proved to be short lived.

Hanson got by Dralle on lap 17, but a yellow flag on that same lap dropped Hanson back into his second place position on the restart and Dralle was rescued. Bob Shryock of Estherville, Iowa, passed Hanson to move into second on lap 30, but Hanson was not to be outdone, moving past Shryock to regain second on lap 43.

Hanson finished second and Shryock was third, followed by Dave Knott of Wabasso, Minn., and Ron Droog of Aberdeen to round out the top five.

Droog was perhaps one of the hardest charging drivers at the end of the race. During the early going, he suffered from a bent tie-rod that affected his steering and left him in the middle of the 26-car field. That problem was corrected on a yellow flag pit stop that forced him to take the restart at the back of the pack and he calmly carved his way through lapped traffic in the final laps to turn in the best effort of any South Dakota driver.

Droog qualified 14th for the 50-lap feature, placing second behind Shryock in the ‘B’ qualifying main event. Both men suffered bad luck in Tuesday’s heat races with Droog suffering from a broken wheel and Shryock blowing an engine.

The two-day race proved to be a jinx for some other South Dakotan's. Bruce’s Roger Saathoff blew his second engine in as many nights and Harrold’s Sheldon Reding, who was as high as fifth early in the feature, was forced to drop out with overheating problems. And, Huron’s Randy Hickle, who qualified fourth, was eliminated from further competition in a crash -in the fourth lap of the 50-lapper.

Hickle, who started off the evening by winning the trophy dash, was one of four heat winners on Tuesday night, joining Hanson, Saathoff and Rich Thomas of Aberdeen.