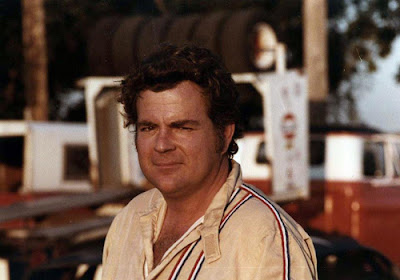 
Blue Island, Ill. (July 31, 1977) - Returning to Raceway Park this season is "just like coming home" for Jerry Kemperman. And for somebody who hasn't been home for three years, he sure is taking over as head of the household in a hurry.

Kemperman, who was a perennial contender for the track title from 1968 (when he won it) through 1974, left Raceway in a dispute over a new tire rule which limited the late model drivers to a certain brand and size.

And it was a very profitable venture for the 39-year-old railroad switchman, who made a name for himself driving the Midwest racing circuit, winning numerous feature events.

But being a Blue Island resident, there was good reason to believe that he would once again return to his home track. That belief became reality this season, when owner/promoter Pete Jenin made another change in the tire regulations, one that Kemperman liked.

So, with a 1976 Camaro that had proven itself worthy on the half-mile circuit last year, he made his first appearance at Raceway's quarter-mile oval on opening day in the 100-lap classic.

Kemperman led that race for quite a few laps but had to settle for second when a touring professional from Ontario Canada (Junior Hanley) passed him in a tangle at the halfway point of the race. Since then, however, his record ranks on the incredible.

In 11 feature tries going into last night's action, Kemperman had 11 victories. Included in those triumphs was a win in a return match with Hanley. At this pace, he could very well set a track record for feature wins in one season, set by Bud Koehler in 1967 (30).

And the fast start this year has also inched him closer to Ted Janecyk, who is the fifth ranking driver in career feature wins with 96. Kemperman now has 74 and could conceivably pass him be the end of the current season.

On a long-term basis, there is a good chance that he could wind up second in career features if he stays at Raceway for a few more seasons. Koehler leads the field with 482, but former track star Bob Pronger only has 148 wins to show for his second place ranking.

Kemperman also has one big advantage over any of the other veteran drivers who are still active and in the top 10. Being only 39 years old, he hasn't really hit the peak of his racing years. But he may have other plans though, for the future.

"I would really like to run some of the bigger shows," he says frankly. "I just like bigger tracks. You don't get involved with as much damage arid the money is much better."

Money is something that all drivers have to depend on to keep their cars in top-notch shape. And money, or lack of it, has been the main reason that so many top short track drivers have had to remain top short-track drivers, instead of attacking the big circuit.

But money wasn't the reason that Kemperman got into racing and it won't be a reason for his leaving the sport when that day should come. In fact, love of racing may keep him on the track for many years to come.

"It's awfully hard sometimes," he admits. "Racing can become more of a job than a thrill week after week. But it's just something you do. Once it gets in you, it's hard to think about leaving it."

Other drivers may have better overall records than Kemperman, but it's unlikely that many have done better in the short time span than the late model veteran has. Kemperman has racked up those 74 features in just a little over 14 racing years at the Blue Island plant, although he's been racing full-time for 16.

"When I was 23 years old (back in 1961), I had a friend quite a bit older that raced at Raceway," he explained. "I was constantly monkeying around twisting wrenches Also, my uncle used to lake me to the races a lot when I was little. So I always wanted to be a race driver, although I felt that it was a far-fetched idea."

Kemperman ran his first race at Raceway during the 1961 season and didn't win an event. Things didn't fare well in '62 either, when he managed to win only one heat.

But signs that he was to be a great one surfaced during the 1963 campaign, when Kemperman won seven heats, three trophy dashes and four features. "He really came along pretty rapidly," said Wayne Adams, track announcer at Raceway since the middle 1940's.

Kemperman hinted around at being a contender for another few seasons until 1968, when he won four heats, four trophy dashes and a whopping 15 features to break Koehler's two-year streak.

Those early seasons took a lot out of the drivers, according to Kemperman, who spent many a day in the workshop banging out dents and crushed radiators after battling with the rough and tumble veterans.

"There was a lot of bulldogging in those days," he recalled. "It was strictly crash-bang, get out of the way racing. I've broken my ribs three times at Raceway and never really been hurt anywhere else.

And for that reason, Kemperman uses a window net - a commodity that many tracks are making mandatory this year. "After getting into an accident at Morris (another track) and my pit crew said that my head was actually hanging out the window, we went to the net."

Today, however, racing has become more a scientific sport with fewer crashes, but more skillful driving. Kemperman, who could bash fenders as well as anyone, had to change his driving style to fit the times.

Looking at his record, Kemperman is doing just fine.