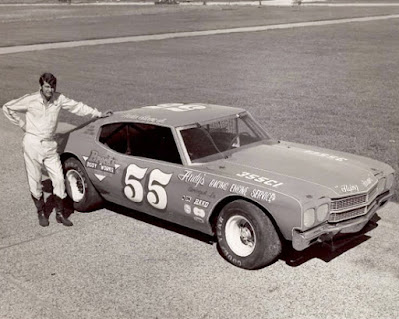 Shreveport, La. (April 1, 1973) – Harlan Beene, a 31-year-old plantation manager from Bossier City, La., and a graduate of dirt track racing, nosed a 1970 Chevelle onto the asphalt pavement at State Fair Speedway and in less than one and a half hours, inscribed a mini-history on the 23rd annual Pelican 200 late model stock car classic.

Never had a rookie driver caught the checkered in the springtime inaugural of the International Motor Contest Association stock car circuit. And not since the early 50’s, when Herschel Buchanan of Shreveport had a “local” driver beaten back the big threats of the Midwest.

The Pelican 200, minus defending champion Irv Janey of Cedar Rapids, Iowa, who was kept at home by business interests, developed into a two-car race between Chevelle’s.

Landing in second place, three car lengths back was snake bit Freddy Cook of West Monroe, La. Cook, who overhauled Beene, had led from lap 58 to 103, and looked like a sure winner, despite a dragging air scoop under the front bumper, as late as the 180th lap.

Then 10 miles from the finish, Cook spun out in the third turn and slammed into the guard rail – a victim of his left front wheel catching a car he was lapping.

“It knocked the steering wheel out of my hand,” a despondent Cook said.

Despite three false starts – two spinouts in the first turn that derailed a couple of green flags – the pace was slow and easy for the assembled 4,700 in attendance.
“We knew we had a lot of laps to go,” said Beene, who first ran an asphalt track in Jackson, Miss., two weeks before. “We just took our time, both of us.”

Still, it was a long afternoon. Beene waved his hand over the hood of his #55 and laughed, “I don’t want to see one of these things for a week.”

Trailing thee two front-runners was Gordon Blankenship of Keokuk, Iowa, in a 1970 Plymouth and finishing fourth was Gary Brooks of Grand Prairie, Tex., in a 1972 Monte Carlo.

Gerry Harrison of Topeka, Kan., second only to Janey in the 1972 IMCA point’s standings, finished seventh.

Another page from history was inserted by Mrs. Martha Wideman of Lufkin, Tex., behind the wheel of a lavender-colored Monte Carlo. The first woman to compete in an IMCA event, dating back to 1915, Martha clocked 26.73 second back-to-back in the two-lap time trials. Unfortunately, a broken steering arm sent her to the pit area after only 14 laps of the main event.