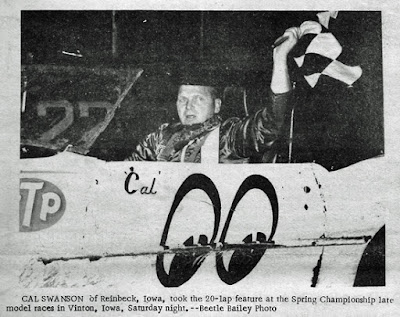 Swanson banked $350 for his feature win, his first and only checkered of the evening, as more than 2,100 fans watched the thrilling action on the renovated quarter-mile.

Many race fans were turned away on a perfect night for racing as the Cedar Valley Racing Association, sponsors of the first big race for 1971, posted “standing room only” signs outside the entrance a half hour before the program started.

More than 35 late models signed in for the annual event, which saw Hansen, Glen Martin of Independence, Iowa and Zwanziger take checkered flags in heat races. Becker outran Bill Beckman of Lisbon, Iowa, to capture the semi-main. Cedar Rapids’ Bob Ballard won the consolation ahead of Larry Wasserfort of Waterloo.

Red Droste of Waterloo, always a threat in any race, was limited to a second place in the third heat, and blew a motor in the semi-main, keeping him out of the main event.