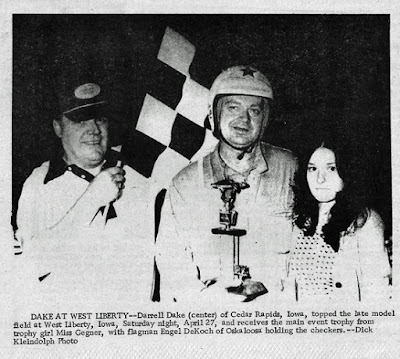 West Liberty, Iowa (April 27, 1974) – It was bumper to bumper and side to side as drivers from all over came to race at the West Liberty Fairgrounds’ half-mile oval here Saturday night, under the supervision of Super Stocks, Inc., in the hands of Dale Gegner of Brighton, Iowa. Darrell Dake captured the feature event of the evening, after a thrill-packed program. On Dake’s bumper was Ron Weedon of Pleasant Valley, Iowa, who stuck like glue, but couldn’t get around the Cedar Rapids, Iowa, veteran.

Weedon did set fast time in time trials with a 24.73 second clocking. Dake had second fastest time at 25.00 seconds flat. Third and fourth fastest were Ron Hemsted of Lone Tree, Iowa at 25.04 seconds and Mike Niffenegger of Kalona, Iowa, at 25.07 seconds.

The track record of 24.59 seconds is held by Jim Gerber of Long Grove, Iowa, and with the looks of the times this evening, could easily be broken before the season is over.

The late model events saw Curt Hansen of Dike, Iowa, taking the checkers in the first heat. Jim Burbridge of Delhi, Iowa, outlasted the pack in the second heat and Bill McArdle, traveling all the way from Shullsburg, Wis., went home with the third heat prize.

The Australian Pursuit saw Duane Steffe of Colona, Ill., keep out in front of the top-five point leaders to win that event and Ken Walton of Cedar Rapids, Iowa, won the semi-main.

The capacity crowd saw many thrills and much excitement as all the races were very close, and only one mishap occurred as Jack Lueth of Davenport ended up going up and over the second turn wall in the first heat. He suffered extensive damage to the car but escaped unscathed.