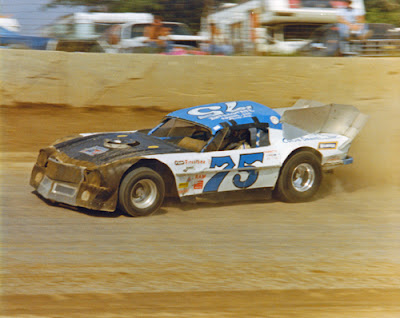 Phoenix, Ariz. (April 10, 1982) – Missouri’s Larry Phillips was in a class by himself in the finals of the RC Cola/7-Up Western World Championships for late model stock cars at Manzanita Speedway.

Although the line-up for the 40-lap feature was studded with driving stars, no one could match Phillips and his lightning fast Camaro. Phillips started alongside Bill Cheesbourg but easily beat the Tucson veteran into the first turn. Even though he had to endure several cautions and a red flag for refueling purposes, Phillips still managed to lap all but nine cars en route to a $3,500 payday.

There was only one car that may have been able to run with Phillips. Don Hoffman of Des Moines, Iowa, made it into the feature by virtue of winning the 20-lap semi-main and was on his way to the front when disaster struck prior to the halfway point. Hoffman had moved his Camaro into fifth place and was challenging Cheesbourg for fourth when he jumped the cushion and slammed into the retaining wall, ending a beautiful drive.

While there was really no contest for the front spot, the action was hot and heavy behind Phillips. Throughout most of the race, there were six or seven cars in contention for the runner-up spot. Mike Gibson and Carl Trimmer swapped the second position two or three times and George Brazil Jr. was in the thick of the battle and finally took over that spot with only three laps remaining. However, tough luck that has plagued him the past two weeks struck again s he blew an engine on the white flag lap and pushed his car across the finish line in tenth.

Hoffman, who had problems during the qualifying races, was not seriously challenged in the semi. He started fifth and was in front before the first lap was completed.

The excitement in the semi was created by Roger Saathoff. The South Dakota driver started 15th and drove his way to second place even though he was losing his clutch in his Camaro. Gaylord Lippert finished third with his Thunderbird and qualified for the feature when Red Dralle scratched. However, Lippert had to scratch a well when his mount lost oil pressure. Saathoff would last only a few laps in the feature before his transmission went out.