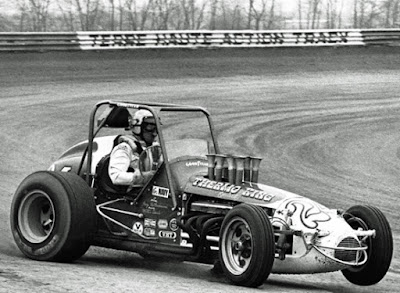 Terre Haute, Ind. (April 14, 1974) - Gary Bettenhausen won the 4th annual Tony Hulman Classic for United States Auto Club sprint cars yesterday to cap a day’s furious racing activity at the Terre Haute Action Track. In doing so, he captured the record for number of consecutive feature wins in a sprinter, breaking out of a tie with Jim Hurtubise, who won an unprecedented 5 straight.
The Tinley Park, III., native who now drives out of Indianapolis, started 13th in the field, but worked his way through the field and finally got past George Snider, the winner of the inaugural Hulman Classic three years ago, on the 34th lap.

He held it the rest of the way, fending off challenges offered by Snider, Jan Opperman, and A.J. Foyt to take the 40-lap event.

Foyt put on one of the better showings in the Hulman as he found the high road to his liking and began passing easily from his 12th starting position.

But he could do no better than seventh through the latter stages of the rare until the 38th circuit, when a yellow was flagged for an accident.

Trying to get position to make a run for the crown and its big purse, he bolted to the outside barrier and was accused by USAC officials of passing under the yellow His apparent fourth place finish was declared foul and he was put 15th in the unofficial standings.

USAC officials were to make their decision on the outcome of Foyt’s appeal.

Jackie Howerton sped to the lead at the start and held that spot for the first 18 laps before making contact with the turn one wall, allowing Snider to slip by and take charge for the next 15 circuits.

Snider would build a slight lead until Bettenhausen made a daring move on lap 34 to get past him for the top spot. Opperman would also manage to get by Snider for second-place, setting up an exciting finish with Bettenhausen for the remaining six circuits.

Bettehausen, in addition to winning the feature, took the final heat race. He started dead last in that one and took the lead on the eighth and final lap. Other heat winners were Don Nordhorn, Mel Cornett and Lee Osborne. Bruce Walkup nipped Tom Bigelow in the 10-lap semi-main.