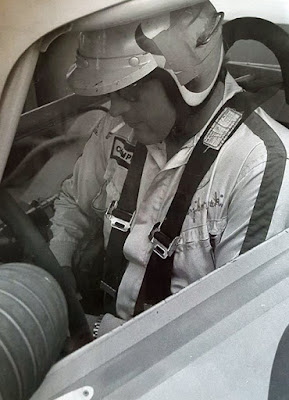 Elko, Minn. (April 9, 1972) – Although the weather that greeted race fans at Elko Speedway on Sunday afternoon was of the mid-winter variety, the type of racing presented was more like the heated competition of mid-summer.

Dan Prizborowski of Savage, Minn., took late model feature honors but not before Minneapolitan Dick Giles and Mert Williams of Rochester, Minn., issued a 22-lap challenge that forced the popular driver to go all out in his bid for the opening checkered flag ride of the season.

Giles, driving a sparkling new Ford, had won both his heat and the trophy dash while Williams was second in his heat and third in the dash. Prizborowski was fourth in his heat, but because the top heat winners were inverted for the main event, the defending track champion found himself on the pole position.

But, with only five laps gone, both Giles and Williams had already moved through traffic to touch Prziborowski’s bumper and from there on, the trio battled lap after lap, never more than a car length apart.

Despite constant pressure from Giles and Williams, though, Prizborowski was able to hold on, winning by a couple of car lengths at the checkers. Williams settled for second while Giles finish third. Dick Stang of Prior Lake was fourth and Larry Smith of Shakopee rounded out the top five.

Giles and Larry Behrens of Northfield were heat winners. Giles was also the trophy dash winner and Norm Setran of Bloomington was the consolation victor.

Meanwhile, 45 hobby stocks checked in and produced the same close-knit action. Joe Ritchie of Minneapolis was the feature winner followed by Dewey Gustafson of St. Paul and Al Pearson of Richfield.

Sunday’s doubleheader was accident free except in warmups when John Boegeman of Shakopee flipped his Superamerica Chevy but escaped injury.

The biggest surprise to track owner/operator Phil Stewart was the splendid turnout of fans, nearly 2,200 total.

“With the temperature around 35 degrees I anticipated maybe a quarter of this for fans but with 1,700 passing through the turnstiles plus the youngsters, I was pleasantly pleased,” Stewart said. “With warmer temps, we’ll be on our way.”