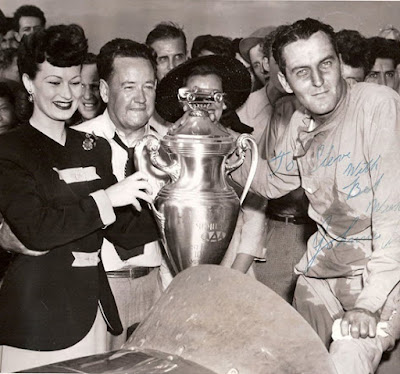 Parsons finished a lap and a quarter ahead of Rex Mays of Glendale, Calif., and Johnny Mantz of Gardena, Calif., was another lap behind in third place.

Myron Fohr, the reigning national champion, drove a steady but unspectacular race that enabled him to take fourth. Frank Burany of Milwaukee, Wis., was fifth.

Shorn of some of its glitter by a late start, and a field reduced to 11 cars, this third renewal of big car racing at Arlington Downs quickly resolved into a spirited battle between Parsons and young Troy Ruttman of Ontario, Calif.

After hours of waiting, a remarkably patient crowd of about 12,000 finally were rewarded when Parsons and Ruttman began jockeying for the lead on the third lap. Neither paid much heed to the slippery footing on the turns and the battle raged on for 50 laps before Parsons finally broke out front.

Ruttman, a tall, curly-haired youth of 22, was the sentimental favorite and when he dropped out 20 laps later the element of conflict was gone. Thereafter, Parsons led by half a mile or more and it was mostly a matter of waiting around to see if Parsons’ vehicle would hold together.

Ruttman had moved ahead on the third lap and managed to stay 440 yards ahead of Parsons until the 33rd trip. Then Parsons cut the advantage to a car length and twice just missed overtaking the youngster on turns. But he hit a soft spot on the backstretch, almost skidded out of control, and slipped a quarter of a mile behind.

Parsons came up again after 50 laps and finally passed Ruttman going into the west turn on the backstretch on lap 54. Ruttman was forced out on lap 73 with a broken steering arm and blistered hands.

Cutting sharply on the turns and generally driving like a man in a hurry, Parsons maintained a half-mile lead over Mays until lap 85 when he hoisted the advantage to a full lap.

Parsons and Mays then held their positions through the last nine laps and Mantz, who took third when Ruttman exited, coasted in third.

Mays experienced a driver’s nightmare on the final lap when he ran out of fuel as he entered the main straightaway. His car had just enough momentum to carry him across the finish line.

For an afternoon of leap-footed and often daredevil driving, Parsons collected 200 points towards the national AAA racing title and $2,600 in prize money. He was also rewarded with a kiss from his wife, blisters on his hands that forced him to greet friends with a two-finger shake, and a handsome trophy.

“It was swell to take first, but we all miss Ted,” he said. Horn had won the last two races run at Arlington.

Mays won the pole position with a qualifying speed of 90.92 miles per hour. 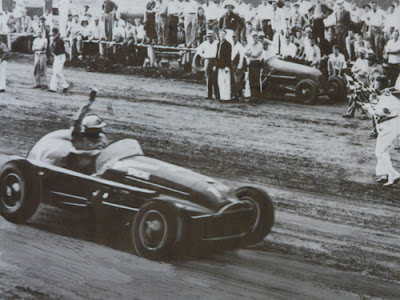 Johnny Parsons raises his hand in victory as he accepts the checkered flag.