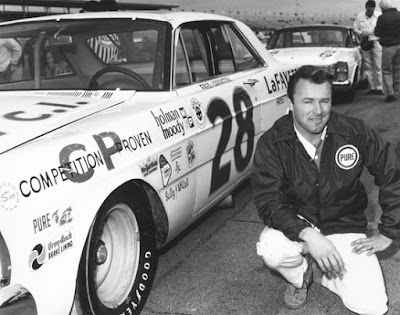 
Charlotte, N.C. (April 26, 1967) - Fred Lorenzen, the biggest money winner in the history of professional stock car racing, announced Monday night he is retiring from the sport.

The 33-year-old former Elmhurst, Ill., carpenter's helper has been a star driver for Ford Motor Company since 1961. During that time, he set all-time money winning records, including a single' season's take of $113,570 in 1963 and close to one-half million dollars overall.

A bachelor, the curly haired Lorenzen often has been called "the Sandy Koufax of stock car racing."

At a dinner in his honor Monday night, Lorenzen said that, like Koufax, "I want to quit while I'm on top. I've won everything that you can win, and there's no way for me to go now but down."

Lorenzen, 5-3 and always impeccably dressed and tanned, said he has no immediate plans. He has no plans to marry and, because of careful investment of his earnings, he has financial security.

"I haven't spent a dime of the money I've earned racing," he said. "I live on other money, from endorsements and such things. I don't live big."

It has been known for several years that the golden boy of racing has invested in blue chip stocks and bonds. A close friend and associate said of him recently.

"The closest friend he has is his stock broker and about his only reading material is the Wall Street Journal."

Lorenzen holds the NASCAR records for the most victories, 21, in races of more than 250 miles; the most superspeedway triumphs, 12; the most triumphs in a row in major races, 5, and is the only man in NASCAR history to have completed the sport's grand slam with victories on each of the South's five superspeedways.