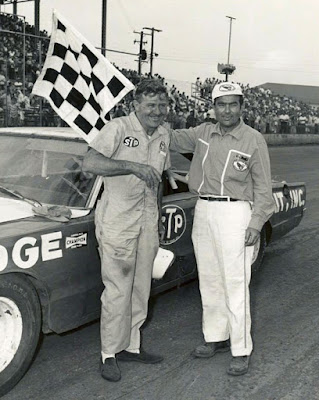 Ernie Derr is greeted by starter Russ Brown after winning the Pelican 200.

Shreveport, La. (April 16, 1967) – Seven-time IMCA national champion Ernie Derr of Keokuk, Iowa, demonstrated why he is regarded as one of the nation’s premier dirt track experts as he piloted his 1967 Dodge Coronet to three new track records en route to victory in the fastest Pelican 200 stock car classic in the history of the event.

The champion withstood the challenges of Ramo Stott, the defending Pelican king, and Lenny Funk.

It was the official season opener for the International Motor Contest Association stock car season which will find the drivers competing throughout the Midwest and returning here in October for the season finale.

Derr said he made the final preparations to car in Keokuk before starting his trip to Shreveport. He didn’t touch the engine after arrival. Prior to the race, he took the car out for several test laps for testing of the gear ratio and engine. He said he felt secure in his bid for the title from the start of the race.

Instead of time trials, promoter Frank Winkley called for the top eight drivers in the final standings of the 1966 season to undergo a 10-lap preliminary heat for deciding starting positions. Seven other drivers who were newcomers to IMCA had a drawing spot for their positions.

Derr won the preliminary in 4 minutes and 34.55 seconds with Funk finishing second. Stott encountered trouble in his steering mechanism when he was involved in a smashup in the third turn.

Derr and Funk unreeled an early battle for the lead. Derr paced the first two laps, Funk pushed ahead on the third but Derr regained the top spot on the fourth and held forth until the Kansas wheat farmer overtook the Iowan on the seventh. Derr went back in front on the tenth with Funk and Stott trailing. Funk again pushed ahead on lap 15, Derr was back ahead on lap 17but Funk regained the pace on lap 23.

Derr went ahead on the 29th while touring the half-mile in 25.78 seconds and Funk nosed ahead on lap 30.

Tire trouble sent Ken Christie of Springfield, Mo., ramming his 1967 Dodge Charger into the guard rail on lap 39. Funk pitted for the required 30 seconds on lap 54 and returned to the pits on lap 68 while losing six laps to Derr and Stott.

Derr and Stott both went into the pits on the 92nd lap and after making the trek around the oval, Stott returned to the pits. Two laps later, Stott was back in the pits for a tire change and Derr pitted again on lap 97.

Lewis Taylor of Shawnee, Kan., driving a 1967 Plymouth, spun in the northeast corner on lap 102 and was sidelined with an engine cut in half. Funk experienced engine troubles of his own on lap 153, pitted and then returned to action.

Promoter Winkley said the crowd of 8,500 which overflowed into the infield was his second largest since inauguration of the Pelican race.