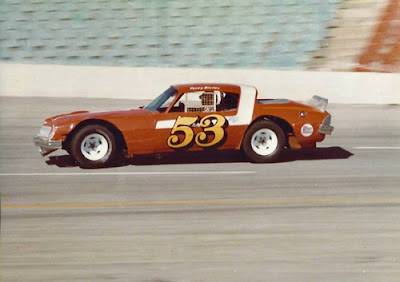 Odessa, Mo. (April 11, 1976) – A flat tire put Terry Bivins out of contention in the feature event for the late model stock cars last week at I-70 Speedway, but the Shawnee, Kan., driver had everything in his favor Sunday afternoon as he put his 1976 Camaro into victory lane.

Terry Brumley, who started the feature on the pole, led the first few laps before Bivins took over. David Goldsberry, looking for his second straight feature victory, also made it past Brumley and with “Tiger” Bob Williams and Brumley, kept the heat on Bivins until Brumley went out with mechanical issues on lap 9.

Bivins stretched out his lead to about 100 yards at the finish. Goldsberry, Williams, Dave Klingsporn and Jerry Nussbaum rounded out the top five finishers.

Bivins competed last week in the 1974 Chevelle that he competed in last year but chose to run his new Camaro after running third at Tri-State Speedway in Pocola, Okla., Friday night.

“We bought the Camaro in Indiana,” Bivins said. “And rebuilt it over the winter. We tore it down to the bare frame and roll cage and “Bivinized” it.”

Bob Williams set fast time with a one-lap orbit of 18.85 seconds. Bivins won the trophy dash. Brumley was the winner in the fast heat while Klingsporn took the middle heat and Dick Turner nabbed the slow heat.