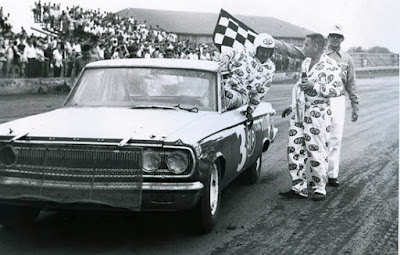 Ernie Derr exits his car after winning the 1965 Pelican 200 at Shreveport. Derr’s mechanic offers up a cold beverage while starter Bernie Carlson presents the checkers. – Bill Causey Jr. Photo
Shreveport, La. (April 4, 1965) – Ernie Derr may be getting older but he still has the know-how when it comes to winning stock car classics as evidenced on Sunday afternoon when he chalked up his fourth championship in the Pelican 200 marathon before a crowd of 8,000 at State Fair Speedway.

The Pelican officially opened the Golden Anniversary season of the International Motor Contest Association and when the checkered flag was handed to Derr, the race had produced two new world records.

Ramo Stott of Keokuk, Iowa, finished in the 14th position, but was the man who grabbed the new marks while battling with Derr and a field of 18 drivers.

Four drivers alternated as leaders of the Pelican before the title was decided. Don White, the former three-time IMCA national champion and one-time USAC king, grabbed an early lead for three laps but was overtaken on the fourth by Lenny Funk of Otis, Kan., who gave in to Stott on the 12th lap.

Stott, one of the “Keokuk Komets” and second in points for the 1964 season, set his first world standard when he finished 25 laps in 10 minutes and 6.73 seconds. He picked up another record for 50 laps with a time of 20 minutes and 34.76 seconds.

Derr forged to the front on lap 97 when Stott was forced to the pits because of rear-end troubles. Derr had made his pit stop for gas on lap 83.

Funk, riding in third place behind Derr and White, went to the pits for fuel on lap 117. Stott returned to the track on lap 131 after losing 38 laps due to repairs. Two laps later, he retired for good when he was forced to the pits again with his left front tire almost off the car.