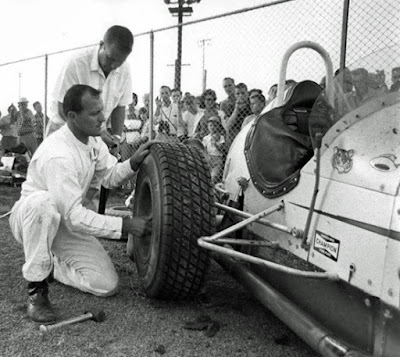 Always one to draw a crowd,  A.J. Foyt has a audience as he changes a tire prior to race action.

Foyt, starting in the sixth spot as 4,700 fans looked on, took the lead on the 19th lap and came home a 15-length winner over Johnny White of Warren, Mich. Jimmy Maguire of Dunellen, N.J. was third.

Foyt took the leaders one-by-one to slip ahead and pull away.

He moved into third place on the 10th lap while White was holding about a length-and-a-half margin on Maguire.

The Texas driver went by Maguire on the 14th lap and went to the outside on the 19th lap to pass White and race home a victor.