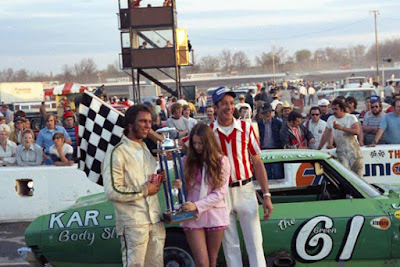 Tom Maier is presented his trophy after sweeping the Twin-100's at Odessa.

Maier, who drives a green colored car, supposedly an ill-fated color in racing circles, won what turned out to be easy back-to-back features. In the first 100-lapper, he outlasted Bob Senneker of Dorr, Mich., and in the second contest, he survived over Larry Phillips of Springfield, Mo., who provided some heroics by changing motors in between feature races.

The track opener attracted 43 late models and a crowd of 6,937 to the half-mile high-banked paved track.

Maier, who won the Springtime 200 here last year, and who also holds the one-lap qualifying record of 18.18 seconds, started the first feature in the second row. Jim Bickerstaff of Niles, Ohio, who set fast time in his ’73 Camaro, led the first lap. Then, Senneker, at the wheel of a ’73 Camaro, took over until a fuel pump fractured, and Maier, poised for the victory, was more than willing to take over.

In the second feature, when the field was inverted and Maier started dead last in the 30-car field, he steadily worked his way through traffic and a little commotion to better Phillips.

Phillips, driving a 1972 Camaro, was a front-row starter in the first race, but blew an engine on lap 20. During the running of the 20-lap Super Six Stock Car feature, Phillips and his crew changed motors and because of the low first-race finish, started on the front row for the second contest.

Phillips led most of the way, but Maier dashed through the field, overtook Phillips and won going away as Phillips’ second engine became ill. It finished with a hurting sound and it appear as though only seven pistons were working.

The first main event worked into a thing of beauty as Senneker, Bickerstaff, Maier, Dave Wall of Kansas City, Terry Bivins of Shawnee, Kan., and Fred Whisler of Independence, Mo., drove through traffic as If they were chained together.

Attrition, though, would take its toll and the front-runners narrowed down to Maier, Dick Trickle of Wisconsin Rapids, Wis., and Bivins.

Trickle was driving a borrowed car. He had crashed Friday night in Madison, Wis., and again on Saturday in Rolla, Mo. He then commandeered a car he sold last year to Rolla owners. Trickle would finish with a second in the first race and a third-place in the second contest.

As is the pattern on this track, it was the out-of-towners who stole the show. Bivins did the best job of making it a race as he put on a late charge in the opener, but a sputtering engine halted his progress and he finished third. In the second feature, Bivins got tangled in a first-lap crash and switched mounts, but to no avail.

“We were just guessing all the way, just shooting cold turkey,” Mair said from victory lane. “Our suspension was not set up, but we guessed right on the springs. It worked.”

As for the completely inverted start that placed him at the rear of the field for the second feature. “That was some tough driving through all of that junk. Maybe they could invert 10 or 15 cars, but not the whole damn field,” he remarked.