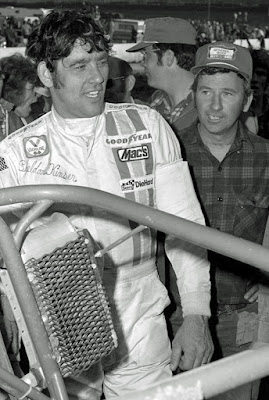 Rossburg, Ohio (March 28, 1976) – The low road turned out to be the best road for Sheldon Kinser Sunday at a packed Eldora Speedway.

As a result, the Bloomington, Ind., veteran pocketed $3,150 from a $16,495 kitty at the opening United States Auto Club sprint car race of the season.

The usual $7,500 purse, as against a 40% of the gate, swelled to record proportions when an estimated 12,000 race-hungry fans poured into Earl Baltes’ half-mile, high-banked dirt playground.

The record-smashing day also included Bill Englehart’s 17.551 second ride during time trials. His 102.55 mile per hour effort wiped out the previous record of 17.56 seconds, set by Lee Osborne in 1975.

Starting in eighth position, Kinser benefitted from four caution flags to keep within striking distance of Joe Saldana and Tom Bigelow, who actually dominated the race.

Both Saldana and Bigelow chose to run the fast lane up high. However, that route proved extremely hazardous, especially through the first and second turns.

When Saldana hit a rut entering turn one on the 22nd lap, Bigelow charged into the lead. When Bigelow returned the favor four laps later, Saldana took over.

Kinser patiently waited for his opening. It came on turn three on lap 38, and he waved bye-bye to Saldana, Bigelow, and the rest of the USAC gang.