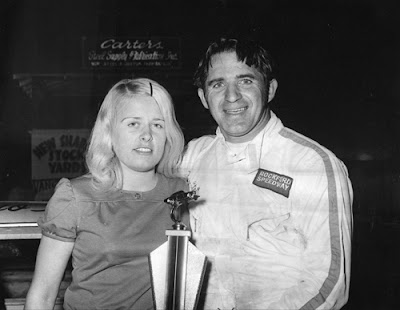 Oskaloosa, Iowa (May 31, 1972) - For the fifth straight week of racing at the Southern Iowa Fairgrounds there has been a different winner. Ramo Stott of Keokuk became #5 as he captured the 20-lap main event before 3,200 people here Wednesday.

Stott took the lead on the lap 6 replacing Bill Newman of Burlington. Newman was forced to drop out when his auto broke an axle. But Stott didn’t exactly breeze home to the checkered flag as John Moss of Iowa City moved up on him.

Stott started out on the outside of the second row while Moss was back in the fourth row. Don Hoffman of Des Moines held onto third for most of the race until he developed engine trouble and was passed by Ed Sanger of Waterloo.

Sixteen of the 18 cars that started the event finished and remarkably there was not a single red flag all through the entire night of racing. Stott took home $580 which included his win in the second heat.

Bob Hilmer of Dysart won the first heat while Pokey West of West Chester took the third. West battled off five others who were right behind him for the flag and nipped Karl Sanger as both came across bumper-to-bumper.