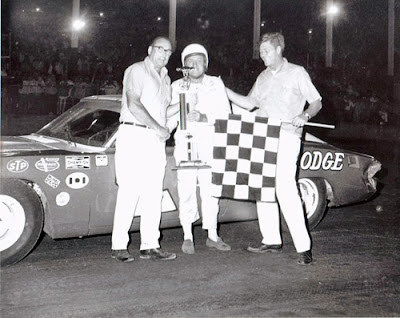 Des Moines, Iowa (May 4, 1968) – Despite 40-degree weather, over 9,500 fans turned out to watch Ernie Derr and his 1967 Dodge Charger to win the 25-lap late model feature at the Iowa State Fairgrounds on Saturday night.

Derr, one-half of the Keokuk Komets two-some, fought off three cars, during most of the race. Verlin Eaker of Cedar Rapids, piloting a 1967 Dodge formerly owned by Derr, Ramo Stott, the other half of the Keokuk duo, and Dean Montgomery of Milan, IL, were involved in the nip and tuck battle.

Derr moved into the lead on the second lap and never gave up. Numerous times, Eaker was close on his tail, but he never got around the eight-time International Motor Contest Association champion.

Eaker dropped back to third, letting Montgomery and his 1967 Chevelle move into second, and then fell down to fourth, letting Stott in his 1967 Plymouth, climb to third.

Derr started the evening on the right foot, winning the first heat while Eaker won the second heat. A newcomer to the Des Moines oval, Stan Stover of Reinbeck, won the 15-lap semi-main.