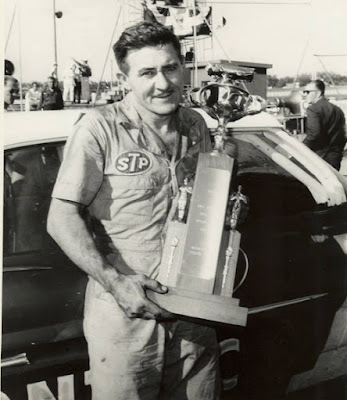 West Salem, Wis. (May 24, 1959) - Ernie Derr of Keokuk, Iowa, drove his 1957 Pontiac to a dusty victory Sunday afternoon in the Badger 200-lap race at the Inter-State Fair track near West Salem.

Derr’s time for the 100-mile distance was 1 hour, 57 minutes and 5 seconds. Pacing his car all the way, Derr came from the middle of the 19-car pack early in the race and was always a contender when not in the lead.

Derr took the lead for the last time on the 164th lap and held it when Newt Bartholomew of Carlisle, Iowa, piloting a 1957 Chevrolet, ran out of gas before the third turn to lose the lead.

Bartholomew signaled frantically for his pit crew, but couldn’t make the full lap back, which cost him additional time before he returned to action. He led from lap 129 to 164.

Nine of the 19 cars that started the race finished the competition before 4,000 spectators.

Dick Hutcherson, also of Keokuk driving a 1957 Pontiac, was the initial pace-setter for the first 13 circuits.

Then, Frank Richards of Cedar Rapids took his 1957 Chevrolet convertible into first place on lap 14 after Hutcherson experienced mechanical difficulties. Hutcherson re-entered the race later but was never a threat (finished 12th).

Richards led 47 laps before Derr captured his first lead on lap 61. Bartholomew and was behind Derr and Richards.

Richards pressed Derr, nearing the lead when his car pulled to the top of the track on lap 72 with a broke spindle. Richards, who recorded thee fastest time in qualifying with a time of 30.65 seconds, would come back later to finished 10th.

Derr would continue to lead until lap when Bartholomew made his bid for the top spot on lap 76. However, Bartholomew’s lead would be short-lived as Derr moved to the front of the field on lap 92.

Bartholomew then staged his bid to grab the lead on lap 129. He held it until Derr took over for keeps on lap 164.

By the time he returned to action, Derr held a five-lap lead on Bartholomew. Bob Potter of Duluth, Minn., driving a 1959 Chevrolet, held second place. Potter - a hard-luck pilot with the International Motor Contest Association – then had problems of his own. He completed 184 lap before mechanical difficulty (broke rear-end housing) dropped him from second to a fourth-place finish, behind Bruce Nystrom of Oshkosh, Wis.

Bartholomew again stopped before the third turn, but he had 192 laps under his belt to clinch second place even though he couldn’t finish the race.

With the victory, Derr moved into first place in the IMCA standings. The previous leader, Ramo Stott of Keokuk, finished dead last after only completing 20 laps in his 1958 Ford.