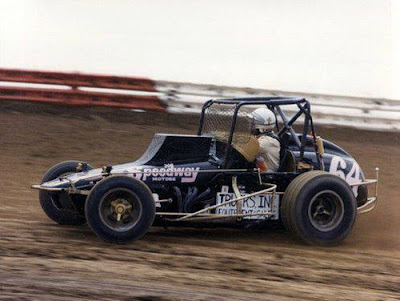 Opperman, driving the Speedway Motors sprinter, led the entire 40 laps to pocket $11,149 for his effort. Opperman also moved into fourth place in the USAC sprint car standings with the win. Larry Dickson, who finished 10th Saturday, still leads the standings with 132 points. Second-place finisher Pancho Carter is second with 117 points.

Although leading every lap, the Noxon, Mont., minister had his hands full, due to a persistent Carter. Carter, last year’s winner, started sixth but moved to second in two laps. Carter was able to pull right behind Opperman on each of the three yellow flags which slowed the field. But each time the race was green-flagged Opperman jumped out in front. Opperman’s car, performing beautifully, was just too much for his foes.

At the finish line Opperman was greeted with the red and checkered flag simultaneously due to a final lap accident involving Chuck Gurney. Gurney exited the track by flipping over the turn two guard rail. He was pulled from his car semi-consciously and rushed to a nearby hospital, where he was reported to be badly shaken but not seriously injured.

For Opperman, it was his first USAC victory of the young season. Following Jan across the finish line were: Carter, Bubby Jones, Dana Carter, Pancho’s younger brother, and Bruce Walkup, a former Hulman Classic winner.

The best effort of the day was recorded by Sheldon Kinser of Bloomington. The former Tri-State Speedway champ started in 16th position and wheeled his Grant King sprinter to a sixth-place finish.