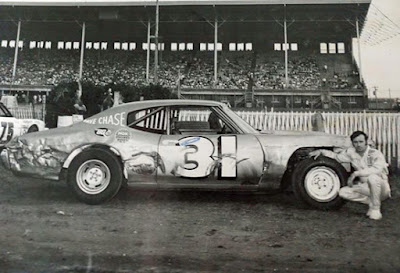 
Des Moines, Iowa (May 26, 1976) - Dave Chase and Ed Sanger each won a feature Monday in the International Motor Contest Association “Twin 80” national late-model stock car races, but Sanger was convinced he should have been a double winner.

"I know I won it,” snapped Sanger, referring to the first race in which, he finished second to Chase. "I could go up and argue with the scorekeepers about it but that’s their job. I know that I won it, though".

In the first 80-lap feature at the Iowa State Fair Speedway finished in such confusion that it took the scorekeepers 20 minutes to figure out the first four places.

The commotion was caused by the mandatory pit stop each driver was to make. When a number of drivers pulled into the pits on the second lap during a caution flag, Sanger said that he stayed on the track and didn't pit until the last few laps.

Sanger insisted that he had passed Chase while he was in the pits and that when Sanger pitted Chase didn't pass him, thus making him the winner.

Sanger wasn't the only driver who wasn't sure of the outcome. Don Hoffman of Des Moines and Bill Schwader also were confused about the finish. But the official order showed Chase of Council Bluffs the winner, followed by Sanger, Hoffman, Schwader of Riverdale and Red Dralle of Waterloo.

Chase was just as sure he was the winner and was happy to go away with the $500 top prize. His margin of victory was nearly a half lap.

"I don't know why we ran so good,” said Chase who also was victorious in the trophy dash. "It (the car) was just handling beautifully.

“It felt like it was on asphalt," continued Chase. "It dug right into the turns and came right out in great shape."

In the trophy dash, Chase had the slowest qualifying speed of the six entrants, but he led all six laps for the triumph. Sanger was the runner-up and Stan Stover of Reinbeck was third.

Schwader, last season's IMCA point champion, posted the fastest time around the half-mile oval in his 1971 Torino, a backup car.

Schwader blew the engine in his new 1975 Torino Friday night, but felt that his older car might have had an advantage over the other entries.

"The great big engines running on a hard track are a detriment," he said. "They run good at night when the track isn't as hard, but my lighter one runs better with the hard track."

Sanger took over the first position in the second race when Stover was forced out with wheel trouble after leading the first 59 laps.

Following Sanger in the second feature were Hoffman, Roy McClellan of Riverside, Mo., Schwader and Tommy Edwards of Moore, Okla.

Race officials waived the mandatory pit stop rule in the final feature to avoid repeating the problems of the opener.