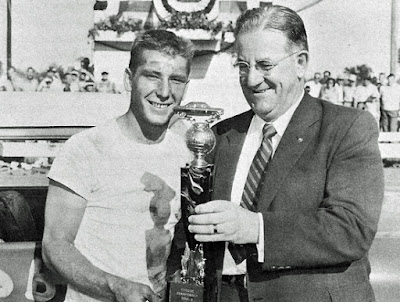 
Cedar Rapids, Iowa (May 19, 1957) - The Burdick brothers, Bob and Bud, dominated the first annual Hawkeye 300 stock car race at the All-Iowa fairgrounds Sunday before a crowd of more than 12,000 fans.

Bob Burdick, a young IMCA veteran from Omaha, won both halves of the grueling 150-mile race and almost pushed his brother Bud, home to second place in the second of two 150-lap features.

The crowd that overflowed the Hawkeye Downs grandstand facilities despite cold temperatures and a threatening drizzle was kept warm throughout the three and-a-half hour program by some sizzling duels on the half-mile track and a series of accidents that dominated the second half of the longest stock race ever held in Iowa.

The most serious accident, however, occurred during the first half of the split feature. Arthur “Bud” Aitkenhead of Omaha, making his first IMCA start of the year, lost control of his car midway through the backstretch. He seemed to gain control as he neared the corner, but then his car spun and flipped twice. Aitkenhead was reported in good condition at Mercy Hospital early Monday.

His crash was only one of a series of mishaps that plagued the leaders in the two 150-lap tests.

Defending point champion Johnny Beauchamp of Harlan, Iowa and Don White of Keokuk, a former champ who led part way in both halves of Sunday's race, both were eliminated in accident during the second half.

Beauchamp, who finished second in the first race, was leading the field at 67 laps of the second event after a long duel with White when he flipped at nearly the same spot in which Aitkenead was injured. Beauchamp stayed in the car and got back in t he race, but was flagged off the track after twice nearly sending Bob Burdick over the outside of the wall.

Promoter Frank Winkley chastised Beauchamp, who at first refused to leave the race, after reaching the pits. He complained that Burdick had been responsible for the two near accidents.

There were numerous other accidents in the final 150 laps, but none of them serious. White was well in front on the 96th lap when he suddenly lost out on the same turn that Beauchamp an Aitkenhead and battled with. He held control of his car, and came to rest against the outside guardrail.

Herb Shannon of Peoria, Ill., and Frank Richards of Marion, Iowa both did some fine driving to avoid serious accidents in the second half when front wheel eluded their cars in the main stretch. Chub Liebe of Oelwein, Iowa who did an outstanding job of driving to wind up second in the overall standings, missed crashing into Richard where his wheel was lost.

White did some fine driving in both halves of the race. He was in contention in the first 150-lap race when a tie-rod broke and his front wheels locked. He held control of the car and guided it into the pits.

In the meantime, Bob Burdick, driving his 1957 Ford, did some fine work in both halves to sweep the split event. He wound up the afternoon by giving an assist to brother Bud that almost brought Bud a second-place finish,

Bud was in second, over a lap ahead of Liebe, when his car ran low on fuel and began to smoke. He was in trouble with a lap and-a-half to go and brother Bob needed only to finish to score the sweep.

Bob suddenly pulled his car in behind his brother's machine and proceeded to push him a lap-and a half to the finish line. Race promoter Frank Winkley, however, ruled that it was illegal for another car to assist and took the lap away from Bud, giving second spot to Liebe.

The act of brotherly love may have cost Bud Burdick, since he might have held second if he was able to finish, even at a reduced speed.