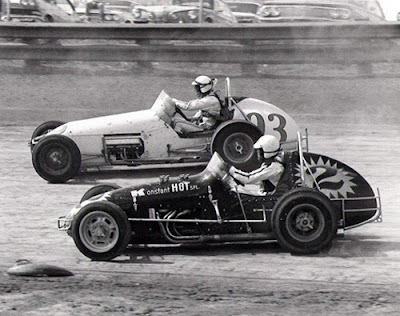 Chuck Hulse (2) and Allen Crowe (93) battle for the lead at Eldora. Crowe would emerge the winner, his first career USAC sprint car victory.

Jones, who drove a lap at 152.027 miles an hour on the Memorial Day "500" track Saturday, was forced out of action Sunday when his car's crankshaft broke before he could complete his first qualifying lap.

Crowe, 34, took the lead on the 16th lap of the 30-lap feature over the approximately half-mile oval and pulled away from Chuck Hulse of Downey, Calif., finishing a quarter-lap ahead.

First place, including heat money, was worth $850 to Crowe – who has three youngsters to support.

Al Miller of Roseville, Mich., treated the crowd of 3,800 to an impressive performance when he finished third after starting 11th.

Roger McCluskey of Tucson, Ariz., won the pole position as the fastest qualifier, doing one lap in 18.77 seconds, but settled for fourth place in the main event.