1965 - Blundy a Winner in Jaycee Program 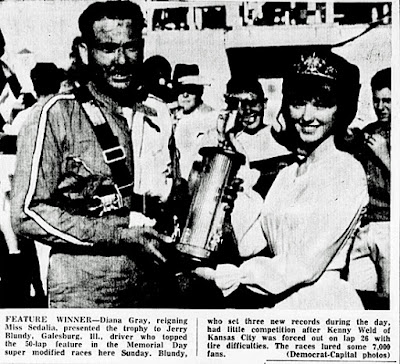 There was little competition in the feature for the heavy-footed Blundy after Kanas City’s Kenny Weld had a right rear tire peel off on lap 24. Blundy had won the pole position and led from the start, but Weld was hot on his heels.

Blundy had shaved two seconds off the qualifying record for the Memorial Day races, circling the half-mile dirt track in 23.558 seconds in time trials. That mark eclipsed the old record held by Tom Corbin of Carrollton, Mo., who held the previous mark of 25.56 seconds.

The Illinois driver’s time in the feature was 20 seconds better than the old record but could have been even better if mishaps hadn’t forced so many caution flags. A $1,000 purse went with the winning of the feature event.

Don Melte of Cowgill, Mo., nabbed the semi-feature and earned $125 in prize money.

Dennis Onwiler, chairman of the Jaycees racing program, and other club officials estimated the crowd at 7,000 persons.

Blundy came to Sedalia Sunday morning after racing in Knoxville, Iowa, on Saturday night, where he won the 20-lap feature race and collected $382 – a good evening’s work but small compared to his winnings here.