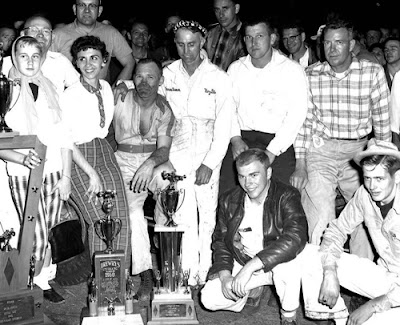 Ronnie Duman is surrounded by crew, family and well-wishers after winning his second Little 500.

It was Duman’s second win in the sprint car classic, having won the 1959 race as well. Duman’s winning time was 2 hours, 12 minutes and 40 seconds.

Two Gardena, California drivers shared the lead the first 100 laps with A. J. Shepherd taking over on the 71st lap, followed by fellow townsman Parnelli Jones. Shepherd, driving an Offy and holder of the pole position, led Jones piloting a Chevy V8, followed by Duman in a GM car, third; Tom McClellan of Waynesville, Ohio, driving a Ford, was fourth, at the end of the first 100 trips around the all-banked, asphalt oval.

Shepherd took over the lead on the ninth lap and Jones zoomed back into the lead at the 40th lap.

On the 122nd lap, McClellan’s car slammed into another, rolled over twice and the daredevil was taken to St. John's Hospital. A total of 19 cars were out of the long race after 125 laps due to accidents, engine or other mechanical failures.

A capacity crowd of over 10,000 pushed and elbowed their way into the arena.


Dick Carter, of Merrill, Mich., was the only newcomer among the top four at the end of 200 circuits with Shepherd still leading the pack, followed by Jones. Carter held third and Duman was still fourth.

Shepherd was still leading the pack by a couple of laps at the 300th lap, followed closely by Duman, who had moved up from fourth; Jones slipped to third, and Carter occupied the fourth spot.

In the next 15 laps, Duman, driving the GMC car which won in 1957, gained a full laps on the flying Shepherd.

Duman would roar away into the lead on lap 360 and began to pile up a lead of three laps on the second-place Shepherd. Shepherd would eventually develop steering problems and fade to a seventh place finish.

That allowed Jones and Carter to move up in position, where they finished.

Track officials announced that more than 12,000 gasoline alley partisans jammed and packed every nook and corner of the stands at Sun Valley Speedway for the 12th annual classic.