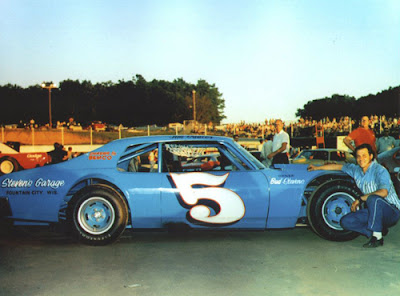 Sauter grabbed the lead from Rich Somers of Stevens Point on the 20th lap, then held on the final five laps for the win.

Johnny Brevik of Fairchild kept his ‘70 Ford Mustang in the lead for the first four laps of the feature, before relinquishing the top spot to eventual runner-up Somers who rode his ‘73 Mustang to the lead for the next 15 laps before succumbing to Sauter.

Wausau’s Larry Detjens wheeled his ’73 Dodge Challenger to third place while Marv Marzofka of Nekoosa drove his '74 Chevrolet Camaro to fourth. Don James of Bloomington, Minn., rounded out the top five in his ’72 Chevrolet Chevelle.

“I was running pretty well, but it was really tight.” said Sauter of the close four-car finish. “Everything is closer now with less engine and more weight.”

A new rule this season contends there must be eight pounds of weight for every cubic inch of engine displacement.

Sauter coupled his feature win along with a first in the five-car fast dash He took a third in the third stock heat and was the evening's second fast timer behind Marzofka who turned the 5/8-mile oval in 21.209 seconds.

When asked if he had any changes in store for his pony car Sauter said. “No, it's running real well right now.”

Brevik won the first stock heat while Bob Jusola of Burnsville, Minn., won the second stock heat in his ’72 Nova. The 6-lap non-money winner’s race was won by Larry Behrens of Northfield Minn., in a ’73 Camaro.