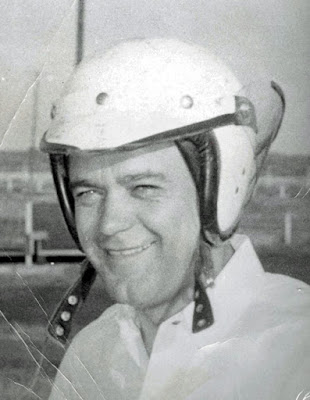 
Cedar Rapids, Iowa (May 22, 1970) - “It’s fun” said Bill Zwanziger. And that may be one of the biggest understatements of the year in auto racing.

The 20-year racing veteran from Waterloo, piloting a 1970 Chevy Nova, kept his streak intact Friday night by capturing the 25-lap late-model stock car feature before a crowd of 3,963 at The Downs. The win was worth $300.

Bill also won the third heat and “B” semi events to mark the second straight week he's completed the “slam”. He began his streak three weeks ago by finishing the night with semi and feature wins. As a result, he's taken a commanding lead in the season point race.

“I’ve never had a streak like this before,” he smiled. “I know there can be lean times; things can change awfully quick.”

For the second week in a row, defending track champion Red Droste of Waterloo, also in a ’70 Nova, finished second to Zwanziger in the feature. Droste started 13th in the 16-car field and Zwanziger began in the 10th spot.

After Bill took the lead on the 19th lap it was clear sailing, but Red had his hands full with the likes of Glen Martin, Karl Sanger, Chub Liebe and Curt Hansen. It was a tight battle for the runner-up spot until Droste broke through the pact on the 22nd tour.

Hansen and Bill Beckman of Lisbon copped heat victories. Other wins went to Bill Barthelmes of Walker in the “A” semi and Larry Schulte of Cedar Rapids in the consolation.