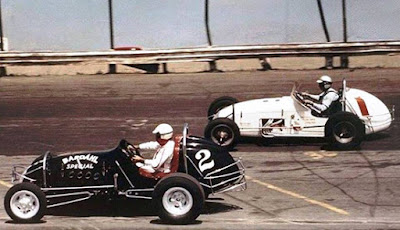 
Anderson, Ind. (May 25, 1963) – Johnny White of Warren, Mich., won the 15th annual Little 500 staged at Sun Valley Speedway on Saturday night. However, he received some fine relief driving from Bob Coulter of Lakeside, Calif., for 177 laps.

White had been involved in a fascinating duel with Pete Folse of Tampa, Fla., until he slowed down to come in for a relief driver after 263 laps. The eventual winner had sustained a back injury at Winchester, Ind., on May 11 and that injury caused him to call for a relief driver.

Coulter came on to renew the duel with Folse after he had stepped in the Weinberger #1 machine. Coulter would make a pit stop on lap 419 which surprised the standing-room-only crowd of over 13,000 which witnessed the International Motor Contest Association-sanctioned classic. Coulter lost almost three laps during that pit stop which was made to allow White to resume driving.

With only 81 laps remaining to be run around the quarter-mile oval to complete the race, it appeared as though Folse had the win in his pocket. However, in what turned out to be the most fabulous "charging” ever shown by a driver at Sun Valley, White passed Folse no less than four times in the final 81 circuits to win by more than a one-lap margin.

Folse and his crew protested the victory, contending the #1 car had passed illegally during the race while the yellow light was showing, but the protest was disallowed.

Defending champion Arnie Knepper of Belleville, Ill., and Gordon Wooley of Waco, Tex., made it the closest Little 500 finish in history by staying in contention the whole distance. Knepper took third, while Wooley was fourth.