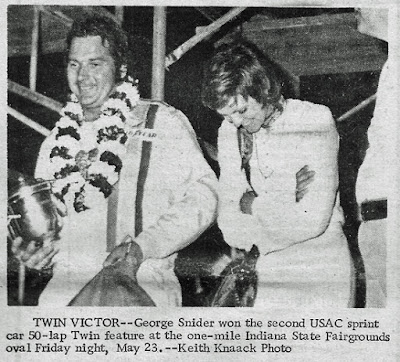 Indianapolis, Ind. (May 23, 1975) – Joe Saldana and George Snider came away with victories, Larry Cannon suffered a broken back and John Hubbard lost all the way around in the United States Auto Club’s Hoosier Twin-50’s sprint car extravaganza at the Indiana State Fairgrounds.

Saldana smoked off with the opening feature and Snider romped in the nightcap before some 10,000 race fans who paid a $17,500 purse.

Cannon stopped the show and broke the four lower lumbar vertebrae in his back after flipping up onto the third turn wall on the third lap of the opener. “Boom Boom” who crashed in nearly the same spot a year ago, was pinned under the steering wheel for a short time but removed and taken to an area hospital. Doctors expect him to recover in approximately six to eight weeks.

Hubbard, whose racing evening ended before he could even run a semi, watched Cannon’s entire ride. He saw the wheel and the axle sail over the wall but what he didn’t see was where they landed – on his Mercedes. The windshield was shattered, the hood was flattened, and Hubbard was in shock.

Back on the racetrack, which was in poor condition, pole sitter Thad Dosher led the next two circuits following the red flag. Rollie Beale jumped ahead on the sixth lap and held on until Gary Bettenhausen got by him on the 15th circuit.

But Saldana, having a wonderful season in the sprints, took command on the next time around ad held off Beale, Pancho Carter, Bettenhausen and Snider to the checkered.

Round two was the best racing of the evening.

Pancho, still sore from his carburetion crash at the Indianapolis Motor Speedway Thursday, started third but bolted into the lead on the fourth turn.

And the defending USAC sprint car champion, who broke the track record in qualifying, battled Snider and Saldana low and high for 33 laps.

But Carter touched the wall between three and four and George and Joe sailed by. The impact flattened Pancho’s right rear tire and he was forced to park a couple of laps later.

Bettenhausen, who spun in the opener but stormed back to take fourth, did the same in the second 50-lapper. He lost it, fell back to 15th and then charge back to fifth. That’s where he was when he looped it again on lap 43, and Sammy Sessions, running sixth, hit the wall to avoid him. Sessions was forced out but okay, as was Gary.

Snider had no trouble stretching his advantage after the yellow and the race finished under the caution.

Beale was second, Saldana was third, Billy Cassella was fourth and Tommy Astone fifth. Cassella put on a brilliant drive, coming from his 18th starting position.