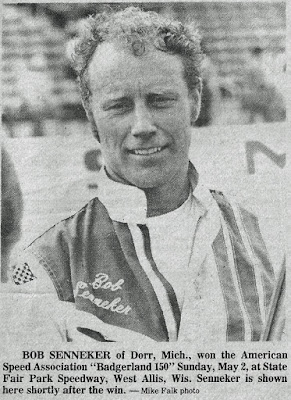 The final 20 miles of the 150-mile event saw Senneker’s ’81 Camaro and Kulwicki’s ’82 Firebird just inches apart in an all-out scrap.

Mike Eddy was third and Butch Miller was fourth. Bobby Dotter was fifth, a lap off the pace for his best-ever ASA finish; Minnesota’s Mel Whalen drove an inspired race to finish sixth, and the top ten was filled out by Harold Fair, Billy Kuhn, rookie Kent Stauffer, and Rusty Wallace.

For Senneker, the win – an unpreceded 36th in American Speed Association competition – offered welcome relief from a skein of early season misfortune, including a massively damaging first-lap crash at Nashville and a flame ride at Atlanta when an oil filter exploded onto hi headers.

“I would have been happy just to finish,” Senneker commented after the race. “But to win is frosting on the cake.”