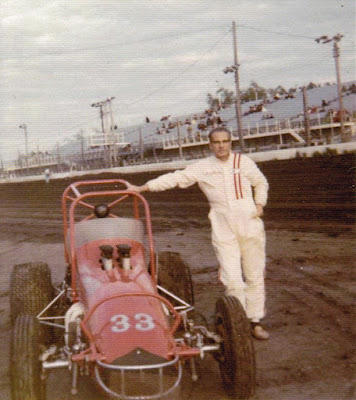 
Knoxville, Iowa (May 20, 1972) – Jerry Blundy found a sticky track surface to his liking as the veteran from Galesburg, Ill., set fast time, won his heat, and then took the 25-lap feature on the Marion County Fairgrounds’ half-mile Saturday night. Blundy took home $615 from the $2,500 prize money up for grabs.

The victory in the feature gave Blundy the point’s lead, moving him from third to first in the standings and knocking out previous leader Roger Rager of Lincoln, Neb.

The track was fast, less than two hundredths of a second separated the top three in qualifying time trials. Blundy turned a 21.19 second lap, the second fastest of the year, for top honors. Rager had a 21.23 second lap and Ray Lee Goodwin of Kansas City, last week’s fast qualifier, toured the oval in 21.35 seconds.

The 5-lap trophy dash went to Roger Larson. A recent winner at Topeka, Larson jumped to a big lead ahead of Lonnie Jensen and was never headed.

The feature was marred on the second lap when Daryl Dawley of Sioux Falls, S.D., cartwheeled his super-modified five times in between turns three and four. He ended up landing outside of the track on all four wheels. He was taken to a local area hospital for observation, but he did walk from the ambulance to the hospital.

Also involved in the collision were Rager, Dick Sutcliffe of Greenwood, Mo., and Jon Backlund of Kansas City. All three drivers were knocked out of the race.