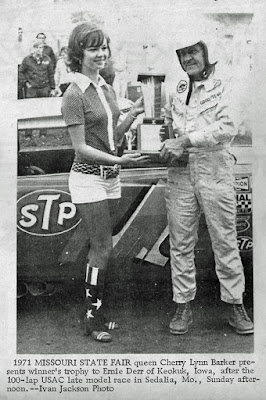 It was a struggle of 73 laps for Derr, the 12-time national champion of the IMCA circuit, who started on the front row and was never worse than third place during the race.

A three-car tangle on lap 73 – one of the cars was driven by Lem Blankenship of Keokuk, Iowa, who was in the lead at the time – a spinout by Jack Bowsher of Springfield, Ohio, who was in second place – allowed Derr to retake the top spot.

It was easy sailing the remaining quarter of the race for Derr, piloting a 1970 Dodge Charger.

Irv Janey of Cedar Rapids, Iowa, another IMCA veteran, finished second in a ’71 Plymouth Roadrunner. Third was Bowsher in a ’71 Torino. The first three finishers completed the 50 miles of racing on the half-mile dirt oval.

Derr made a daring move in the fourth turn to pass Bowsher on the first lap and the Iowan led the first five circuits. Bowsher, displaying great driving skill, took the lead from Derr on lap 6 and led through the 68th time around. Blankenship, who charged the entire time he was in the race, then slipped past Bowsher on the low side coming off of turn four, hitting the Ohioan on the left front and putting him into the cement retaining wall. Bowsher recovered to hold second place.

On lap 73, two slower cars that had been lapped several times tangled in the third turn. Blankenship had no room to maneuver and crashed into both cars and the fence.

Bowsher, in close pursuit, deliberately spun his car to avoid all three, which he did. Derr saw it all, slipped by all four drivers on the low side, and won going away. Janey also eased past Bowsher and went on to claim second.

Ramo Stott of Keokuk, Iowa, the 1971 ARCA champion, had the fifth fastest qualifying time but blew an engine midway through the race after holding fourth the entire distance. Butch Hartman, a rising star in the USAC ranks, suffered a broken rear axle and limped to the finish.

Because of the overall conditions, the entire field of 27 cars was place in the feature. The drivers drove for an estimated $8,500 purse of which Derr collected $1,700.

“I want to win them all,” Derr said after the race. “This one doesn’t mean any more than any of the others. I do think some of the guys out there were running a little over their heads and we’re trying to make it a 100-lap trophy dash.”