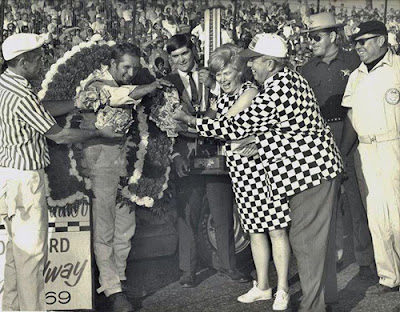 
Rockford, Ill. (September 28, 1969) – Ramo Stott, a professional race car driver of late model stock cars, returned to the Rockford Speedway and won the National Short Track Championship 200-lap event on Sunday afternoon. It was Stott’s first appearance at the track this season.
Last year Stott had set a new track in qualifying but could only muster a sixth-place finish. He would qualify ninth fastest but start on the outside of the front row.
Stott would grab the lead at the onset and wouldn’t be pressured until lap 70 when Dick Tickle, who started on the inside of the second row, applied pressure for the next 55 circuits. Trickle would push his 1968 Mercury Comet inside and out of Stott, trying to get by the Keokuk, Iowa, speedster.
Finally, Trickle would pass Stott on lap 125 but not without losing some sheet metal as the two drivers raced down the backstretch. Both cars also scraped the cement wall as they exited turn #4.
Trickle’s lead would be short-lived, however, as a faulty wheel bearing forced the USAC star to limp into the pits on lap 135.
But, Stott’s worries were not over with yet, as Fritz Wilson of Denver, Colo., in a 1969 Nova, started pushing Stott on lap 155. Stott would eventually distance himself from Wilson but would encounter one more threat before the checkers waved.
Bob Jusola of Mound, Minn., who set a new track record in time trials (14.63 seconds, beating Stott’s old mark of 14.96) was nearly a full lap behind Stott when he decided to make a move for the lead. He would gain on Stott in the closing 10 circuits but run out of laps.
Stott would collect $2,200 for his efforts plus a new motorcycle.