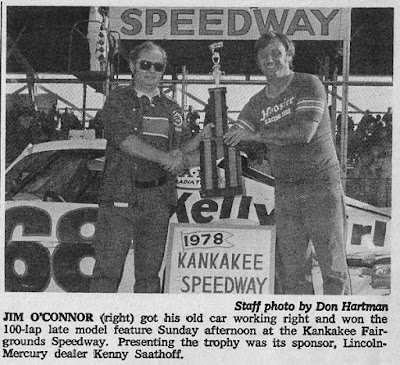 Kankakee, Ill. (October 1, 1978) – Jim O’Conner climbed back into his old Camaro and captured his second straight Northern Illinois Clay Track Championship 100-lap feature for late models at the Kankakee Fairgrounds Speedway on Sunday.
John Provenzano set a track qualifying record to earn the pole position for the main event and soared into the lead which he maintained until lap 36 when O’Conner took charge.
O’Conner remained on top until Provenzano regained the lead on a restart following a caution period on lap 49.
However, O’Conner never let Provenzano establish a comfortable margin and charged back in front by using the inside groove to pass the Glen Ellyn, Ill., pilot on lap 62.
Once in front, O’Conner easily outdistanced his foes the rest of the way to pick up the victory with Provenzano, Bill Davis, and Denny Falkos, who finished second through fourth respectively, the only other drivers to complete all 100 circuits.
Mechanical difficulties sidelined three top contenders, Al Johnson, Arnie Gardner, and Ken Pohlman. Johnson, who had earlier won the trophy dash, bowed out after 30 laps; Gardner, the defending Kankakee late model driving king, lasted 35 circuits; and Pohlman, in the car O’Conner had originally planned to drive, dropped out after 92 rounds.