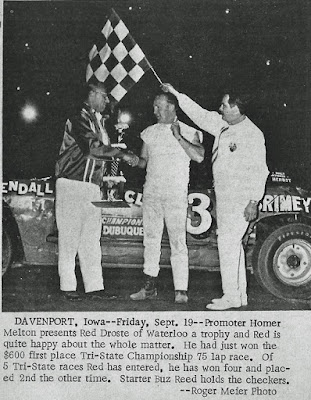 Davenport, Iowa (September 19, 1969) – Red Droste of Waterloo, Iowa, once again proved he is one of the greatest short track pilots in the country as he took top honors at the annual Tri-State Invitational at the Mississippi Valley Fairgrounds on Friday night.
The wily veteran, who started on the inside of the second row, grabbed the lead on lap 4 and then proceeded to hide from the rest of the field in the 75-lapper.
Don Bohlander of Glasford, Ill., trailed Droste almost the whole way and finished second while Darrell Dake of Cedar Rapids, Iowa, took third. Ed Sanger of Waterloo, Iowa, and Roger Dolan of Lisbon, Iowa, rounded out the top five.
The victory for the redhead, who claimed it’s getting harder and harder to win in view of so many young, talented drivers, earned $600 for his evening’s efforts.
John Brockman, Tom Hughes of Monticello, Iowa, and Terry Ryan of Davenport, Iowa, copped heat races and Cal Swanson of Reinbeck, Iowa outlasted Bill McDonough of Cedar Rapids, Iowa, for the win in the semi-main.
Young Bill Barthelmes of Walker, Iowa, nabbed the consolation.