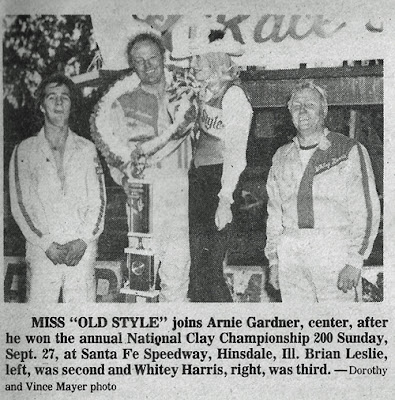 Willow Springs, Ill. (September 27, 1981) – After being locked in a tight battle with Brian Leslie for the lead throughout most of Sunday’s National Clay Track Championship at Santa Fe Speedway, Arnie Gardner wound up the easy winner of the classic event.
The $15,000 purse, featuring the Old Style contingency money, paid $6,000 to win the rich short track show.
Leslie settled for second, Whitey Harris finished third, Ed Sanger took fourth and Dick Potts claimed fifth, all on the same lap with Gardner.
Gardner earned the pole position for the 200-lap contest with fast time at 18.27 second tour of the speedway’s longer course.
The 200-lapper began on an ominous note when Tony Izzo broke a tie-rod and slammed into the first turn wall after taking the opening green. The incident brought out the yellow for a complete restart of the 28-car field.
Another yellow would appear after the restart, this time for a accident in turn two involving Jimmy Bahlas, Ken Widdes, Larry Jackson, Ken Pohlman, Dennis Erb and Art Fehrman.
When action officially got underway, Paul Shafer, who started on the outside of Gardner in row one, soared into the lead. However, Shafer’s reign was short-lived as the leader bolted into the first turn wall and gave Gardner the upper hand and the lead.
Numerous yellow flags would slow the tempo of the race early on. All-out racing would resume, though, as Gardner charged to a commanding lead with Leslie, Harris, Sanger and Potts following behind.
The pace changed for Gardner on lap 44 when Leslie, who tailed Gardner’s bumper for 43 laps, took over the top spot.
Tom Smedley was the cause for the first yellow under Leslie’s reign, when a spin in turn two brought the field to a slow crawl on lap 55.
The red flag stopped the pace 10 laps later when John Provenzano pun in turn two and was hit by Al Schill. Also involved were Larry Jackson, Fred Lofgren, Cloyce Friend and Jimmy Bahlus.
When action was under way for good, Leslie set the pace, gaining a four-car margin over Gardner.
Gardner regained his strength 10 laps from the 100-lap mandatory pit stop and regained his spot in front on lap 91, a spot he would never again relinquish.