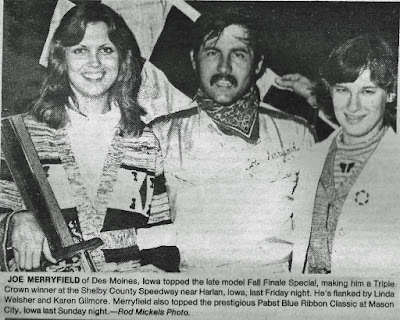 Harlan, Iowa (September 2, 1977) – If you had your money on one of the favorites to win the 50-lap feature on Friday night, you were holding a winning ticket.
The odds-on favorite to take his third special-program title in four appearances here in 1977 did just that. Joe Merryfield of Des Moines is just tough to beat.
Merryfield led from start to finish during the non-stop marathon to win the “Fall Finale” at Shelby County Speedway, taking the main event with room to spare over second-place finisher Curt Hansen of Dike, Iowa. Taking the top prize of $1,000, “Injun” Joe collected $250 in lap money as well.
Consistently staying low in the corners, Merryfield out sped the rest of the pack with relative ease. Hansen would pose the only problem for the race’s polesitter, but Hansen would get boxed in by lapped cars numerous times late in the race killing any chance for a late-race challenge.
Merryfield also left them in the shadows in two other races, winning the trophy dash and third heat.
Bill Wrich of Kennard, Neb., Merryfield’s partner on the front row, would settle for third place behind Hansen. Shelby County Speedway point champion Randy Sterner of Blair, Neb., was fourth.
Speedway officials made the big boys work for their cuts of $7,000 plus purse. The top four finishers in the heat races advanced to the A-main; the top two to the trophy dash, in which positions for the first five rows of the “A” field was determined.