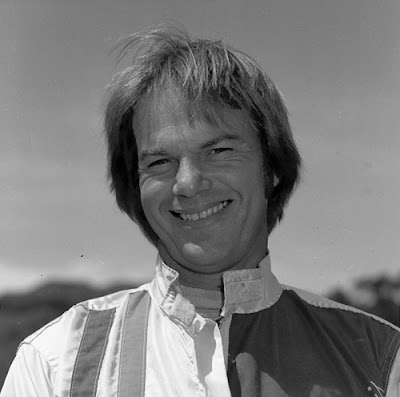 Eagle, Neb. (September 4, 1972) – Jimmy Boyd, a 26-year-old Californian who had to be coaxed to stay in Lincoln another week, collected more than $1,500 Sunday night for winning Eagle Raceway’s 50-lap grand championship sprint car feature.
“I was ready to go back to San Jose,” said Boyd who was made his first Nebraska appearance the week before. He was en route back to California after competing in Pennsylvania since last May.
“I’m glad I decided to stay,” he added. “That’s the most money I’ve won in one race the whole season. We raced four or five nights a week in Pennsylvania and the best feature finish I had all summer was a fourth-place finish, which only paid $250.”
It was the money, Eagle’s $8,000 two-day purse that convinced Boyd to stay an extra week. “That,” said Boyd, “and a lot of people coaxing me.”
He and his wife of two weeks, the former Betty Opperman, stayed in Beaver Crossing, Neb., awaiting Eagle’s fifth annual national one-third mile dirt track championship.
Although it took two restarts before the feature was one lap old, Boyd made the 50-lap contest look effortless.
Driving a Freddie Kain chassis car, Boyd, who started on the fourth row, ran second behind Lincoln’s Lloyd Beckman for the first 3 laps.
He exchanged the advantage with Beckman the next two laps before gaining it for good on lap 6. Beckman, who started on the front row, finished second ahead of Thad Dosher of Topeka, Kan., and Dick Sutcliffe of Greenwood, Mo.
Sutcliffe probably not only had the fans fooled but the other drivers and car owners fooled in the pit area. He was driving Ed Smith’s #44 car with his own blue #19 body over it.
“The #19 engine blew this afternoon at the (Neb.) State Fair this afternoon,” confided Sutcliffe after pocketing $500 for the fourth-place finish. “My mechanics really worked their tails off.”
“A shock busted about the second or third lap of the feature,” he added, “but even if it didn’t I don’t think I could have caught Boyd the way he was moving.”
The red flag was dropped on the first lap of the main event when a car driven by Don Maxwell of Lincoln flipped three times in heavy traffic. Maxwell, who had been first time feature winner only a week ago, was not hurt.